It’s been a crazy start to the racing season for us and as we approach the greatest month of racing, I thought it would be a great time to recap the start of the season. As many of you know, we are pursuing a full championship in the F3 Americas powered by Honda  with Global Racing Group this year. The opportunity to race in F3 was provided to us through a scholarship valued at nearly $230,000 for winning the F4 United States Championship powered by Honda.

Prior to the first event of the year, I was fortunate enough to spend a couple days in the car with Ligier Automotive and felt really comfortable transitioning into the higher aero, higher power car. The turbocharged Honda Engine put out nearly double the power of the F4 engine and the Ligier chassis has an incredible amount of grip supported by the new Hankook tires relative to last years Pirelli tires. The week leading up to the first event was spent with the team where I got acquainted with my once fiersest rivals. They made me feel at home quickly and we worked well with each other right out of the gate. 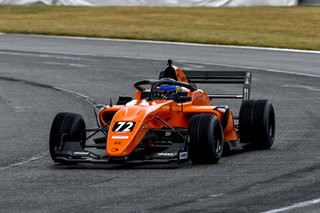 The first event of the year saw us racing during the Honda Indy Grand Prix of Alabama during the INDYCAR event. It always an exciting time during the season opener, but to have it coupled with INDYCAR made it even more special. Out of the gate the whole team showed great pace. I believe all 4 of our cars were in the top 5. Come qualifying, a mix of red flags hindered our quick laps which meant we started 3rd in the 1st race with my teammate, Ben Pedersen, on the pole. I got a good enough start to get up to 2nd place, albeit spinning the tires a good 20 feet down the road. From there on it was a matter of trying to pressure Ben into a mistake. This was essentially my first race dealing with significant aero wash and I clearly had much to learn. Nevertheless, it was a great experience and an awesome 1-2 finish for the team. The second race was very tricky in the sense that it was pouring rain about 2 hours prior to the start of the race, but sunny when we were on the pre-grid. As the track was still wet and cold, the series deemed the race a “wet race” and all of us started on wet tires. From the get-go we knew we had to manage the tire life if no full course cautions came out. Sure enough, the race remained green throughout the entire race up until the last 5 minutes. Our Hankook tires held in there and it was another 1-2 finish for the team except we took the win while Ben was right on our tail. It was certainly a confidence inspiring weekend for not only myself but for everyone at Global Racing Group. To make the weekend even better, our sponsor Stress Engineer Services made the long trek from Houston, TX so I was super pumped to put on a good race for them. 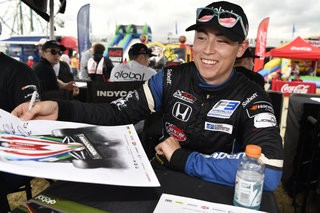 Following the first 2 rounds of F3 Americas was a weekend I always look forward to. The Long Beach Grand Prix is the closest INDYCAR race for me. It’s also one of the first races I’ve ever attended as a race fan. It’s also the same weekend as the RRDC dinner that benefits Team USA and SafeisFast. And in particularly list year, it was a perfect opportunity for me to spend the weekend with our new sponsor, Doug Mockett and Co. Doug Mockett is a gracious supporter of up and coming drivers like Spencer Pigot, Colton Herta, and now us as well! The company is based near Long Beach and each year Doug has a beautiful suite on the track so his employees and guests can watch the racing up close! I spent Thursday night at the RRDC dinner with racing legends, drivers, old and new friends, and so many others involved in the sport. Jeremy Shaw and Tamy Valkosky always do such a fantastic job with this event and their really is no better way to kick off race weekend for me. Friday, Saturday, and Sunday were filled with fast cars, sunlight, and being envious of those behind the wheel! What did you think of that last lap maneuver by Rahal and Dixon?

To finalize a fantastic month of racing, Rounds 3-5 of F3 Americas took place at Michelin Raceway Road Atlanta. The weather is always daunting at Road Atlanta in spring, and sure enough it didn’t fail us. For the 2 days of testing that we had, the track remained dry and we knew we had really good pace for quali and race day. Sure enough come time to qualify, the majority of the track was under water with winds ripping holes in tents and lightning in the background. Around 1pm, the weather had subsided and the track got to work with drying out the track and cleaning parts of it (in some areas, the gravel trap had washed onto the track). Everyone did a fantastic job and we were able to get the first race of the weekend under way.

Per the F3 rules, the starting grid is determined by championship points which put us on pole! Unfortunately, as we were on our first of two pace laps to take the standing start, I experienced an issue where we lost a significant amount of power. I radioed into the team and said it felt like I had an F4 engine in the back of the car. Low and behold the intake to the turbo had popped up. The team reconnected it and I was back on track. As the competitors were lining up for the standing start I pulled back into the pits as I would then be required to start from the pits for making a change before taking the green. Luckily for us, the start was aborted because of a car out of position. This meant the field would take another pace lap. While we still had to start from last, it at least meant I could start to attack and move up the field from the green flag. After the first lap, I found myself in 7th. By the time a mid race yellow came out, we were in 4th right behind my teammates, Baltazar and James. I managed to get around James before the checkered came out. While it wasn’t the result we wanted, it was a great recovery by everyone on the team. 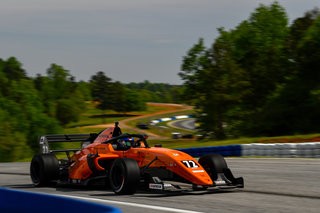 We grabbed fast lap of the Race 1 which put us on pole for Race 2. From the start of the race we never looked back maintaining a slid gap to P2. Unfortunately, a very bad vibration worsened over the course of the race. It got so bad that it eventually caused us to lose steering input. As such, I went off in turn 10 and had to pit to re-tighten the bolts. We exited the pits a lap down in 10th place. Through sheer perseverance and excellent strategy/communication by the team, we ended the race finishing 6th… two laps down. Again, not the results we wanted but these are the types of race you reflect on at the end of a championship and realize just how important those extra points are when it would’ve been easier to just call it a race.

The 3rd race of the weekend we were determined to get the win that eluded us in the first two. We started 2nd on the grid and got a jump on pole position. From there we built a large gap to 2nd place and just managed the pace of the race leading from flag to flag. It felt so good because we were finally able to show the pace that we had all weekend and reward the guys for all of their hard work. As it stands, we are only 1 point off of the points leader and will be working hard prior to Pittsburgh to regain the points lead!

To round out our first month of racing this year, I had the opportunity to drive another Ligier Automotive racecar; a Ligier JSP3 in the IMSA Prototype Challenge series. While I was at the Long Beach Grand Prix, I got a phone call from MLT Motorsports manager Eric VanBibber where they presented me the opportunity to drive with Dylan Murray in their Ligier JSP3 in the IMSA Prototype challenge race at Mid Ohio. I jumped on the opportunity and flew out to Mid Ohio. The weekend was very tricky as intermittent weather littered the weekend. In addition to this, we experience a transmission issue during the test day which resulted in a new transmission going into the car Thursday night. Nevertheless, the team, who was only in it’s second ever event, persevered and got us on track for Friday’s practice and qualifying sessions. 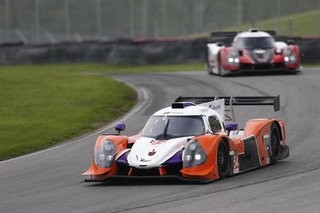 We decided that I should qualify the car and start the race while Dylan would bring the car home for the second half of the race. I ended up putting the car 4th on the grid which we knew we could push for a good result from. At the start of the race, the conditions were very damp but drying slowly. We managed to get up to 1st after the first few laps of the race and maintained over a 10 second gap to the rest of the field. The conditions made it very tricky as the track was gaining time, so you had to balance pushing the car while not going to far and sending the car off track. As we approached the halfway mark, the team called me in at the perfect time. Dylan jumped in the car and maintained the lead right before a full course caution came out. Dylan took the green for the restart and never looked back. He ran a flawless stint and brought the car home for the win! It was such a fantastic feeling getting the win and I can’t thank the MLT Motorsporst crew enough for the opportunity and all of their hard work. This opportunity also would not have been possible without Ligier Automotive and I really appreciate all that they have done for me.

You can follow our seasons progress and all our future events on our social media pages (FB-@DakotaDickersonRacing Insta/Twitter- @DickersonRacing). I really appreciate everyone who has been following our journey thus far.