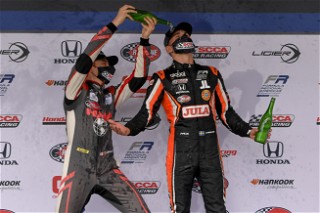 Linus Lundqvist put an exclamation point on the end of his already dominate season with a pair of wins  at Circuit of The Americas on Sunday during the Formula Regional Americas Championship Powered by Honda season finale. Racking up a total of 15 victories for Global Racing Group, Lundqvist tied the overall-season win record first set by inaugural champion Kyle Kirkwood.

With a third-place finish on Sunday morning, David Malukas clinched the Vice Championship one round early and later that afternoon scored more hardware with a second-place finish in the season finale. Malukas earned 15 total podium finishes for the season, which included two victories for the HMD Motorsports squad in Florida.

Victor Franzoni kept Lundqvist honest in first of two rounds on Sunday, applying pressure to the orange No. 26 Jula machine throughout the 35-minute session, but the Newman Wachs Racing pilot didn't have enough at the end for Lundqvist and settled for a runner-up finish. Franzoni followed up his podium performance with another third place finish to wrap up his first FR Americas season with 10 visits to victory circle and third in the season championship.

Jacob Abel crossed the line fourth in Race 2 and made up two positions in the final race of the season for a top-five finish that earned him the Omologato Perfectly Timed Move of the Race. Abel ended the season with 14 top-10 results and a podium finish. He was edged out of fourth place in the season championship by Nicky Hays in the final round. 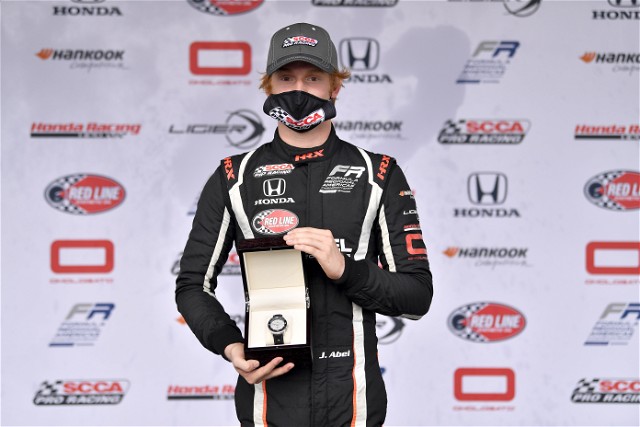 Hays finished seventh in Race 2 at CoTA but his amazing come-from-behind recovery in the final round of the season secured a fourth-place overall result for his rookie year. After starting 11th in Race 3, Hays pulled into the pits before completing one circuit for a tire change following incidental contact through the Esses with another driver. The stoppage put him more than a half a lap down behind the rest of the field, but two full course caution periods allowed Hays to cut through the field for an eight-place finish, making up more than an 11-second deficit in his charge to a top-10 result.

Getting a jump on his 2021 season, F4 U.S. champion Hunter Yeany advanced to fourth place after starting fifth in the final round.