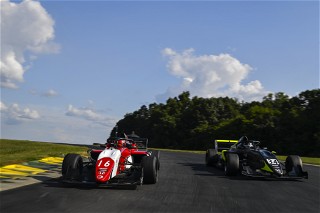 A full grid of 40 competitors representing 10 nations will take to the technical Virginia International Raceway from the comfort of their homes Tuesday (April 7) for Round 3 of the inaugural Formula Regional Americas iRacing Invitational Championship.

A mix of real-world Formula Regional Americas Championship Powered by Honda competitors and development drivers, along with top guest drivers will showcase their sim skills in a 30-minute shootout with live streaming coverage sponsored by Hankook Tire starting at 7:10 p.m. Eastern.

However, this week, Cangialosi will face several challengers looking to upset him, including FR Americas drivers Blake Upton and Jacob Abel, who both finished the previous rounds in the top-10 and now trail Cangialosi by just a few points in the overall championship.

“With the expanded competition this week, my focus will be having an error free race, which was key to my victory at Circuit of The Americas,” said Canialosi, who will make his FR Americas team announcement in the upcoming days. “I am excited to race at VIR tonight on the SIM.  I have spent a lot of time there in real life, so it’s cool to see how that translates to iRacing.”

The FR Americas partners stepped up to offer real-world prizes. The FR Americas iRacing Invitational Champion will win a set of Hankook Tires while the Vice Champion will be presented with a 90-day virtual training package from PitFit Training. Third overall in points will receive an Omologato watch. Sabelt will carry over its Sabelt Hard Charger contingency prize pack complete with product certificate to the driver with the most position advances in the seven-race iRacing championship.

The championship will be calculated based on the top six results (allowing one race to be dropped).

Live coverage by Apex Racing TV starts at 7:10pm Eastern with a swift 10-minute qualifying followed by a 30-minute race and featuring “podium” interviews with the top drivers. Following the race, FR Americas iRacing Invitational Championship drivers will host a LIVE question and answer session with fans on the FR Americas Instagram (https://www.instagram.com/framericas/)