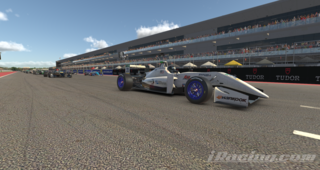 Drivers take a wild virtual ride at Circuit of The Americas

The Formula Regional Americas iRacing Invitational Championship drivers delivered another action-packed event during Round 2 of the virtual championship on Tuesday (March 31).

Hosted at the iconic Circuit of The Americas, Formula Regional Americas Championship Powered by Honda rookie Dario Cangialosi drove lights to checkers, claiming his first victory of the season and securing the lead in the overall championship.

While in the opening round at Michelin Raceway Road Atlanta the guest drivers commanded the race, it was the FR Americas competitors and development drivers with hours of real-life racing experience spent on the 3.426-mile, 20-turn circuit controlling the pace of Round 2.

“The racing has been really fun the last two weeks,” said Cangialosi. “I am back from school held up at home in New Jersey and this has been a great way to pass the time while still preparing me for the upcoming season. I’ve done a lot of time at Virginia International Raceway, so I am looking forward to defend the win next week there.”

Behind the wheel of the former FIA International F3 chassis, 23 FR Americas competitors and development drivers supported by a cast of 10 guest drivers, that included professional sim driver Jose Cabrera and Esports gamer Daniel Nyman, took to the same circuit used in the Formula 1 United States Grand Prix. All cars were prepared identically with spec trim to even the field, opening the door for aspiring contenders to race on equal footing with the established stars.

In a close 10-minute qualifying session, the top-five fastest times were only separated by six tenths of a second with Cangialosi securing pole-position by just .018-seconds over FR Americas driver Quinlan Lall.

Nyman headed Row 2 with Dickerson lining up to his outside for the standing start. The 2019 F3 Americas Vice Champion Benjamin Pedersen and Abel completed the third row.

Cangialosi charged off the line, making the uphill climb to Turn 1. Cangialosi started to open a marginal gap after 19 of the 33 drivers were collected in a Turn 1 melee.

Making it through the Turn 1 pile-up unscathed, Lall fell down the order following an on-track spin, leaving motorsports’ Iron Man A.J. Allmendinger and Round 1 winner Ben Waddell battling for second. While under pressure from Waddell on Lap 11 of 16, Allmendinger clipped the sausage curbing, sending him spiraling off course.

Dickerson, who hung back watching his two IMSA teammates battle, slotted into a comfortable third-place position, while Allmendinger fell back into fifth right into the clutches of championship leader Blake Upton.

Waddell held onto second place before facing the same fate as the other two drivers before him, making a miscued error that sent him smashing nose first into the wall. The damages sustained ended podium run.

“Being apart of the FR Americas iRacing championship is a great experience to keep my racing instincts sharp,” Waddell said. “As a guest driver, I didn’t expect to be running near the top as often as I have been. I was sitting in second before I made a driver error and ended my own race. I am still working as an essential employee so I haven’t been able to get a lot of practice time before the past two event so I am working hard on the evenings to make sure I’m ready for the third round.”

A patient driver in real-life and on the sim, Dickerson captured second, but was unable to make up any ground on first-place Cangialosi, who had already built more than a six-second lead.

“I got a pretty bad start off the line,” Dickerson explained. “That definitely hurt my chance to challenge Dario (Cangialosi) for the lead. He had great pace all race and I really didn’t have much for him at the end. I was in a triad with A.J. (Allmendinger) and Ben (Waddell) for the first half of the race, trying to save tires for the end just in case Jacob (Abel) had a little last-lap rush. All in all it was a good race.”

Abel recovered to a third-place finish after another driver punted him off course early in the 30-minute session.

“I got a really great start and was third by the first turn, but in the next lap another driver got into the back of me, which sent be back about 10 positions. But, that made it a lot more interesting of a race,” said Abel. “It’s been cool to race against guys like A.J. (Allmendinger) who race in real life in series above ours, like IndyCar and the upper ranks of NASCAR. That’s not an opportunity I would have had otherwise, which really makes this experience unique.”

Newly announced FR Americas driver Jordan Missig charged from a 25th-place start to finish in the top 10, taking the lead in the Sabelt Hard Charger season battle with 25 position advances between the two rounds. F4 U.S. rookie Hunter Yeany has made up 18 positions total followed by Hayden Bowlsbey with 16 and invitational new-comer and F4 U.S. driver Jose Blanco with 15 overtakes in just Round 2. The Sabelt Hard Charger contingency prize pack, complete with a Sabelt product certificate, will be awarded to the driver with the most position advances in the seven-race iRacing championship

The FR Americas iRacing Invitational Championship returns to action on Tuesday, April 7, with a mix of new and returning drivers. Round 3 will be held at Virginia International Raceway with live streaming coverage by Apex Racing TV starting at 7:00 p.m. Eastern.

The event schedule will include one 10-minute practice, one 10-minute qualifying and one 30-minute race with points following the FIA FR system. The championship will be calculated based on the top six results (allowing one race to be dropped).

Fans can replay the action live on the FR Americas YouTube Channel: https://www.youtube.com/watch?v=M_RepJ99qRw

*As of March 31, 2020, guest drivers ineligible for championship