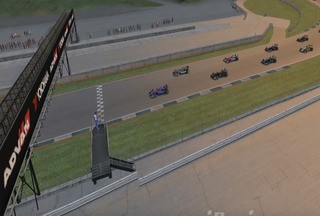 The Formula Regional Americas iRacing Invitational Championship kicked off its inaugural season on Tuesday, taking to the technical Michelin Raceway Road Atlanta for Round 1 of the seven-race series.

F4 U.S. alumnus and IMSA Michelin Pilot Challenge TCR driver Ben Waddell dominated the 35-minute session. In a dramatic final lap that included a pitstop for a splash of fuel, Waddell literally rolled across the stripe, fuel tank empty, to finish the race in first by more than a second ahead of second-place finisher SCCA National Champion and fellow F4 U.S. alumnus Flinn Lazier.

Allmendinger showcased his experience on the 2.54-mile circuit, charging from a 14th place start to round out the top-three.

“What a night that was!” exclaimed Waddell after the win. “With the stacked competition, I knew going into the race, the times would be close. In the race things just went my way. On lap one I was able to slide into the lead. After that the guys behind started battling and I was able to pull a seven second lead. From there, I tried to save my tires the best I could and stay consistent.

“With about five minutes to go we realized fuel was going to be close. After trying to save as much as possible it still was enough and I had to come in for a 0.3 splash. With even that little of a splash, I still under filled and ran out of fuel coming to the line, the race was an absolute blast! I am so glad I could be a guest driver for the championship. Big thanks to FR Americas for having me and look forward to next week to defend my win.”

In the spirit of the Formula Regional Americas Championship Powered by Honda, all the former International F3 chassis were set with spec high downforce setups to even the field.

Following a quick 20-minute practice, former F4 U.S. driver Jacob Loomis shot to the top of the qualifying results to take pole by a mere 12-thousantdhs of a second over FR Americas rookie Dario Cangialosi. However, Loomis withdrew from the opening round, leaving the reigning Formula Atlantic champion Cangialosi vulnerable to the second row on the standing start.

Off the line, Row 2 starters Waddell and Nyman swarmed Cangialosi with Nyman briefly taking the lead before Waddell took over first. Waddell commanded the race from the point for the rest of the round.

Cangialosi was forced to pit with damage sustained from an off-track excursion on the opening lap, but swiftly recovered to finish just outside the top-five.

“It was so fun just to be back racing again,” said Cangialosi. “Qualifying went well and I and ended up with the second fastest time. I had to come in on the first lap to repair the car but managed to fight my way back up during the race. I am looking forward to the next round.”

Battling for position, Das and Lazier lost major ground to Waddell who pulled a seven-second lead. Lazier finally shook Das, allowing the third-generation racer to cut Waddell’s lead in half by the second stint of the race. But, as Lazier and Das tried to catch the front-runner, their fuel levels plummeted, forcing both drivers to the pits in the final lap.

The miscalculation in fuel reserve opened the door for FR Americas driver Blake Upton who slotted into fourth after battling back from a collision earlier in the race. Upton finished fourth overall, topping the standings for the season-long simulation championship (guest drivers are ineligible for the championship). Das rounded out the top five.

“I am really happy with my performance in the first race of the FR America’s 2020 season hosted in iRacing,” said Upton. “I had a really good pace in practice and qualifying and started fifth on the grid. I made my way up to second in the opening stint of the race before I was forced to pit to fix damage after a collision in the battle for second in Turn 10.  After dropping back to ninth, I kept up the pace and recovered for fourth-place finish. Obviously, I would’ve liked to win it outright and had the opportunity to do so but that will be next week. Thanks to everyone who made this possible and to everyone who competed! It was a fun race and I’m looking forward to the next round!”

In the Sabelt Hard Charger season battle, Allmendinger leads with 14 advances, followed by a tie between FR Americas rookie Jordan Missig and F4 U.S. driver Hayden Bowlsbey (both with 10 position advances). F4 U.S. rookie Hunter Yeany made up nine positions, while F4 U.S. graduate Josh Bethune completed the round with eight overtakes. The Sabelt Hard Charger contingency prize pack, complete with a Sabelt product certificate, will be awarded to the driver with the most position advances in the seven-race iRacing championship.

The FR Americas iRacing Invitational Championship returns to action on Tuesday, March 31, with a mix of new and returning drivers. Round 2 will be hosted at Circuit of The Americas with live streaming coverage starting at 7:00 p.m. Eastern.

The event schedule will include one 20-minute practice, one 15-minute qualifying and one 30-minute race with points following the FIA FR system. The championship will be calculated based on the top six results (allowing one race to be dropped).

Fans can watch the action live on the FR Americas Youtube channel.