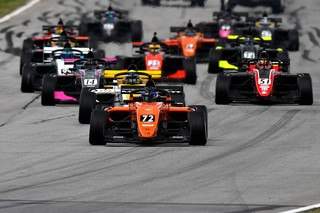 Attracting an all-star lineup from around the world, the FR Americas iRacing Invitational Championship is set for its inaugural debut tonight at 7:00 p.m. Eastern.

Lead by the 2019 F3 Americas Champion Dakota Dickerson, 20 FR Americas competitors and development drivers take to the 2.54-mile Michelin Raceway Road Atlanta circuit in the former International F3 chassis. Seven guest drivers stretching from International Formula 3 to NASCAR Xfinity and even eSports will also go up against the FR Americas drivers in the multi-race simulation championship.

With fan engagement in mind, varying guest drivers from other disciplines were invited to take part in the virtual championship each week with fans even getting the opportunity to race against their favorite drivers over the course of the season by participating in the SCCA Pro Racing iRacing Fan League

In the spirit of the Formula Regional Americas Championship Powered by Honda, all cars will have a spec setup to even the field.

The FR Americas partners stepped up to offer real-world prizes. The FR Americas iRacing Invitational Champion will win a set of Hankook Tires while the Vice Champion will be presented with a 90-day virtual training package from PitFit Training. Third overall in points will receive an Omologato watch. Sabelt will carry over its Sabelt Hard Charger contingency prize pack complete with product certificate to the driver with the most position advances in the seven-race iRacing championship.

The event schedule will include one 20-minute practice, one 15-minute qualifying and one 35-minute race with points following the FIA FR system. The championship will be calculated based on the top six results (allowing one race to be dropped).

Fans can watch the action live on the FR Americas Youtube and Twitch channels.

*Guest drivers are not eligible for the championship grand prize.