Get to know Mac Clark in 10 Questions Mac Clark joined the Formula Regional Americas Championship Powered by Honda (FR Americas) after finishing 2021 as the Formula 4 United States Championship Powered by Honda (F4 U.S.) Vice Champion. Clark proved that he’d be a factor in FR Americas, taking the win the very first time the lights went out this season at NOLA Motorsports Park. Driving the No. 25 Ligier JS F3 for Future Star Racing, Clark finished sixth in the standings after completing 15 of the 18 total rounds.

What topping absolutely never belongs on a pizza?

Mac Clark (MC): “Pineapple. That’s a massive debate and for sure it’s a controversial answer, but I hate pineapple on pizza.”

Do you believe in luck?

MC: “No. Well, that’s a really deep-rooted question. I’m going to go with mostly no. I think that racing is racing; a lot of things happen that are out of your control, and you have to make your own luck. You have to do your best to maximize everything that’s actually in your control.”

What emotions do you go through during a race?

MC: “I try to have zero emotions until I take the checkered flag. I try to be really calm. You know, Kimi Räikkönen—'The Iceman?’ That’s who I try to model myself after.”

If you were developing the next big social media platform, what would it be used for?

MC: “I’d say the promotion of media. I think right now, people receive news in a lot of different ways—whether it be by paper, by social media, by actually watching the news on TV—so maybe something to centralize all of that.” 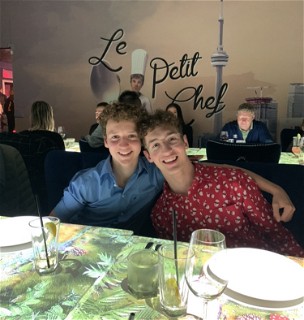 How did you come up with your autograph?

MC: “Man, this actually only happened a little while ago because my dad was bothering me about it—I guess my signature was really bad. Mine is a play on my name—both of my parents helped me work on it. It was about two or three years ago that I came up with my ‘official’ autograph.”

Did you look anywhere for inspiration?

MC: “Yeah, I did. All the IndyCar guys have pretty recognizable signatures, so I was looking at theirs and thinking about mine and what I could do to make mine really recognizable, too.”

How do you decompress after a tough race?

MC: “Usually I’ll get changed, think about the race, maybe listen to some music and try to cheer myself up a little. We all have tough races and you just have to try to stay positive afterwards.”

If you didn’t drive racecars for a living, what would you do?

MC: “I’d probably want to be an entrepreneur. I’d want to go into business and try to be successful that way.”

Who in the paddock have you known the longest and how did you meet?

MC: “I’m trying to think of anyone that I might have karted with. I think it was probably Dylan Tavella. We were just acquaintances, but I met him probably five years ago while karting. We shared the same kart manufacturer.”

You’re pretty lucky to have an Indy 500 winner as your driver coach with Al Unser Jr. at Future Star Racing. What’s the best piece of advice that Al has given you so far?

MC: “Al’s about maintaining a level head and never letting emotions get the better of you. He’s really reassuring; he always has my back. He’s taught me that a lot of the time—not necessarily literally on track—it’s the ‘slow in, fast out’ mentality. You just take it step-by-step, and keep learning and keep building.” I last spoke with Nick Persing and I asked him for a question to ask you. He said to ask you about your karting history. I know you used to be a Birel driver in go-karting, but Nick wanted to know if you ever tried a different chassis and which one you liked better.

MC: “I did try the OTK chassis once. We were on family holiday in England and the boys found a way to sneak away and go play at the karting track. I tried it, but the Birel was always my favorite—it’s what I came from, it’s where my roots are. That’s a good question; I like that!”

Do you have a question that I can ask the next driver I interview? It will be Ryan Yardley.

MC: “I’d like to know what kind of music he listens to before he gets in the car, or if any at all. Some drivers, like Daniel Ricciardo—he’s always got the headphones on. I’m very much like that; I’ve always got my music on.”

Now I’m curious, what kind of music do you listen to?