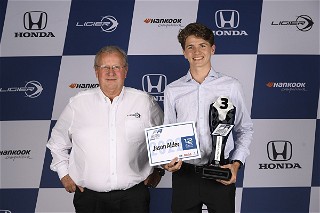 BALTIMORE (November 11, 2022) – It was the final event of the 2022 FR Americas Powered by Honda season as Jason Alder took his talents to the famed Circuit of the Americas (COTA). In a mid-week event that featured a jam-packed schedule including the final three races of the season, Alder earned another victory closing the season with three wins and seven podium results.

Taking to the track on Wednesday for practice, Alder was the fourth-quickest car in the final session leading into qualifying but was not happy with the handling of his TJ Speed machine. The team went to work to set up the car to Alder’s liking, but the hard work was all for not as s broken front wing flap on lap two of qualifying caused a severe loss of downforce.

“Qualifying was difficult for us for sure,” explained Alder. “Practice was tough and then a broken front wing in qualifying further hurt the performance of the car. I will have to work my way forward in the races starting the first one from seventh on the grid.”

Race one saw Alder rocket off the line from his row four starting spot as he began to pick drivers off and move his way forward. Working his way up to the second position on the final lap, contact with another driver saw him fall down the results sheet to sixth all while scoring the fastest lap of the race. Post-race, Alder was elevated to the fifth position based on a penalty to the driver contacting him and added another top-five result to his resume.

Courtesy of his race one fast lap, Alder started the second wheel-to-wheel action of the event from the inside of the front row. Not the greatest of starts, Alder fell back to second at the exit of the first corner trailing only his teammate at the completion of lap one. On the fourth circuit, the leader ran into a mechanical issue that brought out the caution, slowed the field, and moved Alder to the point. After the green flag flew and Alder had inherited the lead, the #77 entry drove to the win taking the checkered flag by more than three seconds in dominating fashion. Additionally, Jason Alder earned the second-fastest race lap and another front-row starting spot for the final race of the season.

The final race of the season on Friday morning was met with unpredictability as the rain had fallen but stopped and the track remained damp for the start of round eighteen. The TJ Speed team opted to start on slicks as the rain had stopped and the track appeared to be drying but with the weather on the way, some drivers opted to start on their rain tires. Jason had a slow start in the wet with a good bit of wheel spin and dropped from second to fourth after the first turn and then to sixth by the end of lap four. Struggling with grip and traction, Jason did not give up and was able to keep the pressure on, and after settling into his rhythm, he was able to march his way forward and all the way up to the second position behind his teammate. Late in the race, the rain started to come down again and the water started to accumulate on the track surface. Jason entered turns 13-14 with a little too much speed and spun dropping him back to the sixth position where he ultimately finished the race.

Alder continued, “It was a good year. On to 2023 with racing plans to hopefully be announced soon.”

Consider donating this month to the Drive for Diabetes Awareness charitable organization by visiting them at www.drivefordiabetesawareness.org/donate.