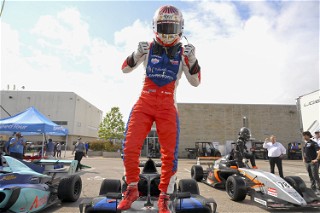 AUSTIN, Texas (November 4, 2022) – Raoul Hyman won a thrilling Race 3 in Formula Regional Americas Championship Powered by Honda (FR Americas) competition at Circuit of the Americas (COTA) for the Mission Foods Austin SpeedTour. The drama began before cars even rolled out for their formation lap, as the clear skies from pre-grid turned to light showers on portions of the track as the formation laps began, and eventually turned to rain in the middle of the event. One car started the race on rain tires, while three others came down pit lane to make the switch from slicks, but it was Raoul Hyman who rebounded from a spin while working lap five to win the race.

“It was awesome,” said Hyman after climbing from the car. “I had my little pirouette before the other guys pitted. After I spun, I realized that I was catching them on the second half of the lap, so I thought maybe we could overcut them. I thought the slicks were holding up pretty well, and then my engineer said we should stay out, as well. So, we made a decision as a team, and it was the right decision in the end. Holding on to it in the rain—that was a lot of fun out there. It was a nice way to end the season.”

Hyman (No. 27 Bethesda Holdings Limited / Solomon Capital Enterprises / Oaklands / Kinross Ligier JS F3) started the race from the pole, but a spin in Turn 11 while working lap five, allowed the Mac Clark (No. 25 Future Star Racing Ligier JS F3) to inherit the lead. As the rain picked up just before Hyman’s spin, Clark and Dylan Tavella (No. 14 Crosslink Kiwi Motorsport Ligier JS F3) ducked on to pit lane to make the switch to rain tires. Hyman once again took over the lead and worked himself up to a 13-second lead as the race neared the halfway point. By lap seven, the TJ Speed Motorsports teams were once again one-two-three as Jason Alder (No. 77 Drive for Diabetes Awareness / HAKUN Ligier JS F3) overtook Nick Persing (No. 29 OPI Commercial Builders Ligier JS F3) for the second position. However, on the next lap, Alder spun and Persing went off track in Turn 11, bringing in a whole new mix of competitors.

Oliver Westling (No. 2 Jensen Global Advisors Ligier JS F3) was the only car to start the race on Hankook’s rain tires. As the rain picked up, he was able to put himself in positions that other drivers couldn’t, as he dove to the inside to overtake second while Alder and Persing went off track. From there, Westling set his sights on Hyman and began chipping away at his lead at a rate of two to three seconds a lap. With the clock winding down, Westling ran out of time and had to settle for second.

After the race, Persing, who had been under the weather all weekend, was named the Omologato Perfectly Timed Move of the Race award winner, and was presented with a bespoke Omologato timepiece for a consistent performance throughout the Mission Foods Austin SpeedTour event.

A full rundown of the official results from Race 3 are available, here.

FR Americas will kick off its 2023 season March 9-12 at NOLA Motorsports Park in Avondale, La. For updates over the off-season, follow FR Americas on Facebook, Instagram and Twitter. Drivers wanting to learn more about FR Americas and how to get involved for the 2023 season should visit FRAmericas.com.