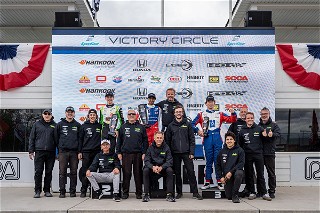 October 31, 2022 – Claiming both the FR Americas Championship Powered by Honda Driver and Team Championships in 2021, TJ Speed is set to make history and do it again this weekend. As the dominant team in the FR program for the past two seasons, the Indianapolis-based program will aim to finish the season strong at the 3.41-mile, 20-turn Circuit of the Americas (COTA).

“It has been a dream the past two years, but it is proof that hard work, preparation, and proper training do pay off,” explained Tim Neff. “We have a different approach to our program compared to others and the product that we put on track produces results.”

Entering the weekend, TJ Speed is the reigning Team and Driver Champion and is on the verge of making that four titles in the past two seasons. Already earning the Team title for the second consecutive year at the most recent event, Raoul Hyman is just a few points shy of providing TJ Speed with back-to-back driver championships as well.

Entering the weekend, TJ Speed drivers sit first, third and fifth in the points table. Hyman leads his closest rival by 70 markers courtesy of nine wins and an additional five podium results and needs a good first race of the three on the weekend to earn the title. Jason Alder will look to hold on to third and add to his season-long results record which includes two victories and six trips to the podium while Nick Persing sits fifth in the season-long battle with three podium finishes.

Neff continued, “We want to close the season with three wins, multiple podiums, and two titles, and will push hard to succeed.”

The TJ Speed trio will hit the track Wednesday for practice and qualifying before Thursday brings the first two wheel-to-wheel races of the weekend. Closing their 2022 campaign Friday, TJ Speed and all the FR Americas competitors will have another chance to top the podium blocks Friday with the final checkered flag of the season that afternoon.