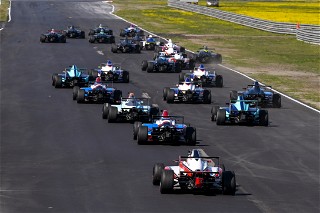 INDIANAPOLIS (October 13, 2022) – Radford Racing School, an Authorized Racing School of Formula 4 United States Championship Powered by Honda (F4 U.S.), is set to host a two-day school for scholarship winners to assist the up-and-coming racers transition from karts to racecars. Scheduled for December 2-3, with the option to participate in additional training on December 4, the school will take place at Radford Racing School’s facility in Chandler, Ariz. Six scholarship recipients from some of the world’s top karting programs are expected to participate.

“We’re excited to have a partner like Radford Racing School to work with on developing young talent,” said Tony Parella, CEO of Parella Motorsports Holdings and the exclusive financial rights holder of F4 U.S. “Radford Racing School is known for superior driver training, and recognized for cultivating quality racers. As we look toward the next crop of drivers that will take the first steps on the Road to F1, I’m thrilled to have Radford Racing School instruct and develop those young racers, and help usher them into the F4 U.S. paddock.”

The Formula 4 School will feature a two-day on-track program, with an optional third lapping day. Utilizing the Ligier JS F4-16, a Honda 2.0-litre engine and Hankook tires—the same combination that F4 U.S. uses in competition—Radford Racing School will prepare drivers for exactly what they would encounter on the track. With ground school, skid control, lead-follow sessions, braking, shifting and handling drills, the program is uniquely designed to account for the fact that participants are some of the top karters in the world. Expected participants include drivers from the Ron Fellows Karting Championship at Canadian Tire Motorsports Park, Mark Dismore’s NCMP Karting Championship, the Margay Ignite Karting Series, as well as Will Power Kart chassis drivers from the karting team of 2022 IndyCar Champion, Will Power.

“The scholarship program we’ve created with the F4 U.S. Championship is opening the door for young kart drivers to advance their careers into open-wheel racing,” said Mike Kessler, General Manager of Radford Racing School, the largest purpose-built driver training facility of its kind in North America. “Our professional instructors have been on the forefront of training and grooming racecar drivers for over 50 years. That’s because many of them have successful racing resumes themselves and love sharing their first-hand experience and passion with drivers of all backgrounds. We’re thrilled to be able to ignite the passion in this new generation of racers and watch as they race their way to the coveted winners’ circle.”

“Karting drivers are already familiar with the dynamics of open-wheel racing on a smaller scale,” said Danny Bullock, Chief Instructor at Radford Racing School. “We’re proud to be able to take their experience to the next level by putting them in the cockpit of our modern formula cars, the Ligier JS F4, which is what they will be utilizing in the F4 U.S. Championship. During our intensive F4 training programs, our experienced professional instructors take their skills to the next level by giving them the one-on-one training and track time they need to become better, safer racers on the track.”

Additional details about the school, including scholarship recipients, will be announced in the upcoming weeks.