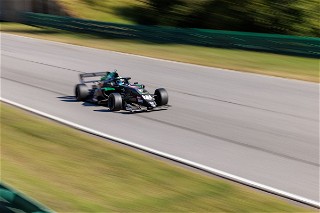 October 12, 2022 – It was a race-winning and double podium performance for Jason Alder at the penultimate round of the FR Americas Championship Powered by Honda. Taking on the VIRginia International Raceway (VIR), Alder dominated the first wheel-to-wheel action of the weekend to take the victory before driving to a podium result in race two. The third and final race of the weekend saw him come from the tail of the field after early race contact to finish ninth.

Race one was a dominating one for Alder as contact between a pair of front-running drivers opened the door for Alder. After qualifying second and narrowly missing the pole position, Alder flexed his muscles when wheel-to-wheel action began. Taking the early lead, swapping once with another driver and ultimately recapturing the lead and never looking back, Alder opened the gap to more than five seconds between him and the rest of the field. Driving to the checkered flag, it was a dominating win for Alder, his second victory of the season.

With one win to his credit already on the weekend, Alder started race two Saturday afternoon looking to repeat the success gained from earlier in the day. With confidence in himself, his equipment, and the TJ Speed program, Alder had to overcome some adversity early on to drive to a podium result. Falling to fourth in the running order, Alder managed his tires and equipment for a late race charge to the second position and his second podium result of the weekend.

Back to the track Sunday, Alder was looking to find his groove and his way back to the top step of the podium. Battling in the top-four, an issue occurred on the second lap that sent Alder and a fellow competitor to the tail of the field. Never giving up and fighting for every position and championship point, Alder rebounded to cross the line in the sixth position but was later relegated to the ninth position.

“It was a great start to the weekend but not the way we wanted to finish it,” explained Jason Alder. “With the championship now out of reach, we head to the final event weekend with the goal of winning as many races as we can and scoring as many points as we can to finish the season strong.”

The next stop for Jason Alder will be the famed Circuit of the Americas for the final FR Americas Championship Powered by Honda event of the 2022 season in November.

For more information on Drive for Diabetes Awareness or to donate online, please visit them at www.drivefordiabetesawareness.org/donate.