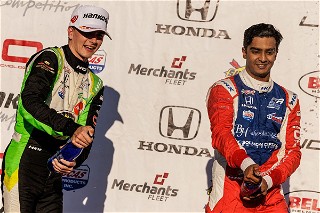 October 11, 2022 – It was another race-winning sweep of the podium for TJ Speed as Raoul Hyman earned a pair of race wins while Jason Alder earned another. Securing the Team Championship and en route to the drivers' title, TJ Speed continues to flex its muscles and be the dominant team in the FR Americas Championship Powered by Honda.

Qualifying could not have gone much better for the reigning Team and Driver Champions as it was a one-two-three finish in qualifying for the TJ Speed trio. With his sights set on the championship, Raoul Hyman dominated the qualifying session to score another pole position by more than three-tenths of a second over TJ Speed teammate Jason Alder. Alder edged his teammate Nick Persing to secure a front-row lockout for TJ Speed. With only three drivers in the field and all three in the front three positions after qualifying, it was a great start to the official weekend for TJ Speed.

While Hyman led early, it was Alder and Persing who were hot on his heels as they both looked to challenge for the race win. Persing had a look on Alder for P2 and in doing so, locked the front tires sliding into Hyman and forcing him into a spin. Alder, taking evasive action, exited the corner unscathed and in the lead. With no caution period, Hyman was back on track and one of the quickest cars as he marched his way through the field from eleventh to fifth. Alder streaked off into the distance to score the race win with Persing crossing the line unofficially in second. Hyman, looking to make a move to fourth on the final lap ended up off course and in the tires ending his day and taking a big point hit in his championship lead. Following the race, Persing was issued a 30-second-time penalty for unavoidable contact and was dropped to last on the results sheets.

“Congrats to Jason for staying out of trouble and taking his second win of the season,” expressed TJ Speed’s Tim Neff. “He was the driver to beat in race one and deserved that win. We will get ready for race two this afternoon and see if we can repeat, or better our race one performance.”

Raoul Hyman redeemed himself during the second race on Saturday overcoming his mistake from race one and providing another win for TJ Speed. Taking the win by nearly five seconds, Hyman scored maximum race points in his title chase as it was another one-two finish for TJ Speed. Round one victor Jason Alder crossed the line in second with an incredible drive while Nick Persing once again put three TJ Speed drivers in the top-five crossing the line P4.

With Saturday evening to prepare for Sunday’s final round, drivers returned to the famed VIR Facility with one more chance to stand atop the podium and Raoul Hyman did just that. In another dominating race, Hyman led lights to flag to take his second victory of the weekend, this time by more than six seconds. Contact between Alder and Persing sent them down the running order with Alder returning to salvage a sixth-place finish while Persing headed to pit lane to change a front wing and eventually finished in ninth.

The next stop chance for the TJ Speed trio to fight for race wins and podium results will be the famed Circuit of the Americas for the final FR Americas Championship Powered by Honda event of the 2022 season in November.