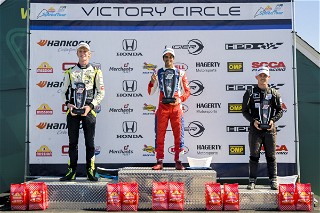 ALTON, Va. (October 9, 2022) – Raoul Hyman continued his march toward the Formula Regional Americas Championship Powered by Honda (FR Americas) 2022 title with his second win of the weekend during the Andy Scriven Memorial at the Mission Foods VIR SpeedTour. Starting from pole, Hyman never wavered in his No. 27 Bethesda Holdings Limited / Solomon Capital Enterprises / Oaklands / Kinross Ligier JS F3, and instead led the race from lights out to checkered flag.

Hyman lined up next to championship rival Dylan Tavella (No. 14 Crosslink Kiwi Motorsport Ligier JS F3) for the final race of the weekend. Tavella put up a good fight, staying within a half-second of Hyman for the first four laps, before he was relegated to pit road and put a lap down before being able to return to competition.

Hyman led the field to the checkered flag for his ninth victory of the season. Becklin followed in second, scoring his best career finish in FR Americas. Yardley was third for his fifth podium of the season.

“That was tough,” said Hyman after climbing from the car. “I locked it up into Turn 13 on the first lap. We really struggled for tire temperature—even yesterday during the first laps. I knew if I could get it done on the first lap and hold position, that we would have the pace of the car to go through the rest of the race. I was pushing, and I just locked up into Turn 13. I decided to stay on the brake and hold the lock-up and get all the way in. From there, I had a massive vibration. It made every braking zone quite tricky. Really, the pace of the car—TJ Speed has done an amazing job. It’s a real privilege to be on pole, to win the race. I’m grateful to be back here.”

For his efforts during the Andy Scriven Memorial at the Mission Foods VIR SpeedTour weekend, Cooper Becklin was awarded the Omologato Perfectly-Timed Move of the Race, and given a bespoke Omologato timepiece embossed with FR Americas branding.

A full run-down of the official results from Race 3 are available, here.

FR Americas will return to the track for their final round of the 2022 season at Circuit of The Americas next month. Contested November 3-5, tickets for Mission Foods Austin SpeedTour are available now at SpeedTour.net. Follow along for all the latest FR Americas news Facebook, Instagram and Twitter, or visit framericas.com.