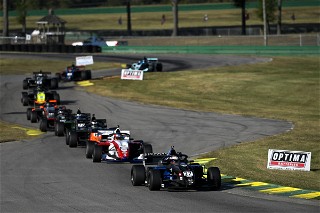 “We’re excited to unveil our championship schedules for 2023,” said Scott Goodyear, Race Director for both F4 U.S. and FR Americas. “We continue to focus on venues that provide an equal balance of challenging our drivers to develop their skills, while also producing exciting racing. The 2023 schedule will do exactly that.”

After a successful return to NOLA Motorsports Park to kick off the current race season, the championships will once again open their 2023 schedules in The Big Easy, March 9-12. Fans can expect an exciting weekend of fan-friendly activities, along with racing from some of the top road-racing series in America, including the Trans Am Series and the Sportscar Vintage Racing Association (SVRA).

From there, the championships will visit one of the most historic circuits on the schedule—the famed Road America in Plymouth, Wis., May 18-22. Included on the championships’ schedules for the last two seasons, Road America produced some of this year’s most memorable moments, including three-wide racing, passes for the lead, and even a podium team sweep by TJ Speed Motorsports in FR Americas and Velocity Racing Development in F4 U.S.

Next, the championships will return to Mid-Ohio Sports Car Course—one of the most frequented tracks in FR Americas history, and the only track that F4 U.S. has visited every year since its inception in 2016. Large crowds are expected for the marquee SpeedTour weekend, June 22-25, featuring four days of racing from FR Americas, F4 U.S., Trans Am, SVRA, and International GT.

Then, it’s back to the east coast for a stop at New Jersey Motorsports Park (NJMP), July 28-30. Both championships returned to the Thunderbolt course for the first time since 2018 this year, and the visit resulted in some of the closest finishes of the season. With their respective Ligier chassis and spec Hankook tires, each championship had a race decided by only hundredths of a second.

VIRginia International Raceway (VIR) will once again host the Andy Scriven Memorial Race, October 5-8. Another mainstay on the schedule for both FR Americas and F4 U.S. with its sweeping views and challenging elevation, the weekend will mark F4 U.S.’s seventh and FR Americas’ fifth trip to the circuit, respectively.

Paying homage to the track’s F1 roots, F4 U.S. and FR Americas will visit Circuit of The Americas to crown their champions on the Road to F1. Scheduled for November 2-5, the weekend will feature all of the SpeedTour series, along with the final three rounds of competition for both FR Americas and F4 U.S., and will culminate with the championship banquet and trophy presentation.

The 2023 championship will also feature some exciting prizes and scholarship opportunities for drivers competing in F4 U.S. and FR Americas. Additional information on those programs will be available in the coming weeks.

About Formula Regional Americas Championship & Formula 4 United States Championship Powered by Honda: The FIA-certified Formula 4 United States Championship & Formula Regional Americas Championship are designed as entry-level open-wheel racing series offering young talent the opportunity to demonstrate their skills on an international platform while keeping affordability and safety as key elements. The Championships align with the global FIA development ladder philosophy of using common components to provide a cost-efficient, reliable and powerful racing structure as drivers ascend through the levels on their way to U.S. or global racing success.