Get to know Scott Goodyear in 10 Questions 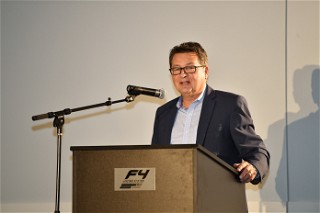 What topping absolutely never belongs on a pizza?

Do you believe in luck?

What emotions do you go through during a race—either when you were racing, or in your role today?

SG: “From a driver’s perspective, it’s about being prepared. It didn’t matter if it was one of the regular races on the IndyCar tour or if it was the Indianapolis 500, I think you have emotions or doubts or second-thoughts if you’re not prepared. The one thing I learned from my parents when I was very young was to always be as prepared as you can be. Preparedness leads you to confidence, and confidence leads you to having success be obtainable.

“As the Race Director, I still follow the same thinking. It’s about being completely prepared—that’s our motivation for the driver’s notes and the driver’s quiz. It’s being prepared all the way down to the details. Instead of being prepared with the race team, the engineers and the mechanics like I was when I was racing, it’s being prepared for the race event with our team. We have Zoom calls with each track in advance of the events to make sure we have all the details covered. We hold weekly Zoom calls with the stewards to discuss each race and prepare for the next event. The goal is to improve each time we have an event. I’m fortunate to be part of a terrific team.”

If you were developing the next big social media platform, what would it be used for?

SG: “Boy, you’re talking to a guy that doesn’t participate much on social media. However, I do use it every day to keep up with our industry and life in general. It’s amazing how it has changed our ability to communicate, and how that’s been advanced by technology. If I were to develop something new, I think I would want to use it for furthering education to allow us to continually improve.” 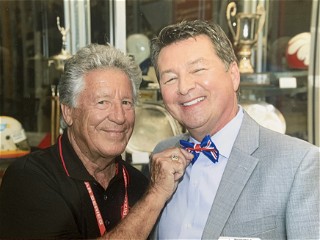 How did you come up with your autograph?

SG: “There was probably a time when I sat down and practiced, but I can’t vividly remember when that was. I do remember looking at other people’s autographs—at the big stars, like Mario Andretti and Richard Petty—and making observations from their signatures for how I’d like my own. I remember wanting to have very nice penmanship, obviously, but probably the foremost thing in my mind was having people be able to read it and understand whose signature it was. When I was racing in IndyCar, we’d sign so much stuff and you’d see so many guys’ signatures, but even I couldn’t tell you who half of them were. I wanted it that when somebody got home after getting so many autographs during their day at the speedway, that they could look at mine and say, ‘oh, I know who’s that is!’”

How did you decompress after a tough race?

SG: “After the race and post-race activities, it was a case of heading back to the motorhome as quickly as possible to get a shower. You’re so sweaty, that helps you feel human again. Once I left the track, I’d like to have a nice dinner and write my notes about whatever happened that day. That helped me improve for the next time I went back to that track, or even for the next weekend.”

If you never became a racecar driver, what else would you have done?

SG: “Here are two completely opposite end of the spectrum answers! I always wanted to become a dentist; I have no idea why. I guess because I went to the dentist a lot when I was a kid. I also thought about becoming a police officer.”

Who in the paddock have you known the longest and how did you meet?

SG: “In our current paddock? Probably, Al Unser Jr. He was already racing Indy cars when I first got there, so we’d interact at driver’s meetings and promotional events. As I was a new driver, I’d also walk around the garages and ask drivers questions. It was all about learning.”

How do you use your experience—both behind the wheel and in the broadcast booth—to help develop the drivers you work with in FR Americas and F4 U.S.?

SG: “From behind the wheel—and I shared this with my son, Michael, when he was karting and driving cars—the thing that I learned so much about is patience. I’ve talked about being prepared, and hopefully I’m teaching that through the notes and PowerPoint presentations that I share with the drivers.

“I started the notes and PowerPoint presentations after my first event with this group. With everyone coming out of karts, I noticed that many drivers didn’t know the basics of car racing or basic protocols like proper pit exit, pit entry and pit lane rules. I realized everything needed structure. I’m trying to shorten the learning curve for everyone that’s in our series. With all my experience behind the steering wheel and then behind the TV camera—either doing it or seeing it—I try to put the lessons I’ve learned into information the drivers can absorb. I want to put them in the best possible position to not only succeed, but to keep them safe. That truly is my main goal.

“I spent 17 years in television; the race control booth was next door, separated by a glass partition. Any time we weren’t live on air on either ABC or ESPN, I would walk next door because there was always something happening in race control. I spent 17 years basically observing race control and watching some of the best people in the business run events. I observed that the most important element is the team you have around you. I am very lucky to have some of the best people in the business to work with in race control.

“What I wasn’t necessarily prepared for—what I didn’t expect—was how much I feel responsible to keep everyone safe. That’s why we implemented the on-board yellow caution light system, auxiliary yellow lights, the team and driver radio ‘All Call’ channels—so we can run the safest program possible. With the experience we have collectively as a group, I don’t ever want us to say, ‘we should have known that’ after something happens.”

If you could start your career all over again – but retain everything you’ve learned and know – what would you change the second time around?

SG: “It took me a while during my junior formula days to understand that it was just as important what you did off the track, as what you did on the track. If I started all over again, I would try to become better off the track—meaning, working with sponsors, understanding promotion, marketing and public relations. I think if I had grasped that earlier, it may have brought more opportunities.”

We’re going to turn these interviews into a series and start interviewing drivers, too. Do you have questions that I can ask in our first set of interviews? We’ll talk to Raoul Hyman in FR Americas and Lochie Hughes in F4 U.S. next.

SG: “Both of those guys are away from their home country, which I experienced many times in my career. So, I’d ask what’s the most difficult thing about moving away from friends and family? How often do they get back?

“I’d also ask how do they cope with being away? I know it’s difficult because I’ve been there myself while racing in Europe and here in the U.S.—away for a year at a time. You go through highs and lows; there is no doubt about it. Although it’s very difficult, to me, it was worth the sacrifice.”