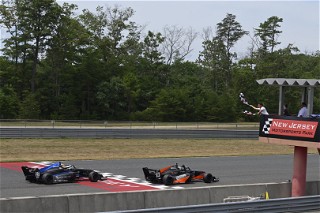 MILLVILLE, N.J. (August 1, 2022) – Dylan Tavella got his second Formula Regional Americas Championship Powered by Honda (FR Americas) victory of the weekend on Sunday morning at New Jersey Motorsports Park (NJMP). Tightening up the championship battle point by point, Tavella closed the gap ever so slightly with a near-perfect weekend at his home track as he recorded two race wins and a second-place result across the three races.

At lights out, Tavella had a strong start in his No. 14 Crosslink Kiwi Motorsport Ligier JS F3, immediately jumping to the point position as his teammate Ryan Yardley (No. 78 Crosslink Kiwi Motorsport Ligier JS F3) moved into second. While those two started opening up a gap on the field, championship points leader Raoul Hyman (No. 27 Bethesda Holdings Limited / Solomon Capital Enterprises / Oaklands / Kinross Ligier JS F3) dropped to fourth from his second-place starting position. Taking care of his Hankook tires, Hyman slowly climbed his way back through the field. By lap 7, he passed his teammate Jason Alder (No. 77 Drive for Diabetes Awareness / HAKUN Ligier JS F3) to take over third, and by lap 9, he moved past Yardley to reclaim the second position. From there, Hyman set his sights on Tavella. Closing the gap from 2.2-seconds all the way down to three-tenths of a second, it seemed like Hyman may make a bid for the win—especially when two full-course cautions presented the opportunity of a restacked field.

Steadily hitting his marks and running the defensive line when needed, it was Tavella who crossed the line first to claim the victory. Hyman finished second, just 0.089-seconds behind the leader, marking his 12th-consecutive podium finish in 12 races.

From there, a series of stewards’ decisions affected the finishing order. Aaron Jeansonne had crossed the line fifth, but the driver of the No. 25 Future Star Racing Ligier JS F3 was awarded a third-place result, as the two drivers in front of him received penalties. It was a great present for the Louisiana native, as he also celebrated his 24th birthday on Sunday. Cooper Becklin (No. 91 Crosslink Kiwi Motorsport Ligier JS F3) and Athreya Ramanan (No. 96 Cedar Coast / Outland Living / Lordco / Jevity / Penn-Elcomm / LA Prep / Kirby Studio Ligier JS F3) moved into the fourth and fifth finishing positions, respectively. Meanwhile, Yardley fell to sixth after receiving a five-second penalty for causing a collision. Likewise, Nick Persing (No. 29 OPI Commercial Builders Ligier JS F3) dropped to seventh with a 30-second penalty also for causing a collision.

A full run-down of the revised provisional results from Race 3 are available, here. Final results are pending a manufacturer compliance check and are expected within two weeks.

FR Americas will be back on track October 6-9 for the Andy Scriven Memorial at the Mission Foods VIR SpeedTour. Tickets for the event are available now at VIRnow.com. To watch a video production of this weekend’s races, subscribe to SpeedTourTV on YouTube, click the bell icon to turn on notifications and receive an alert when new content is posted.