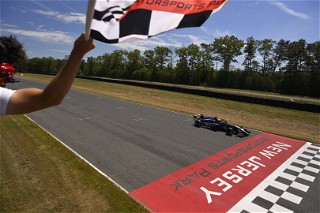 MILLVILLE, N.J. (July 30, 2022) – Raoul Hyman continued his charge in the 2022 Formula Regional Americas Championship Powered by Honda (FR Americas) season by winning the opening round at New Jersey Motorsports Park (NJMP) on Saturday afternoon. Marking his seventh win on the season in the No. 27 Bethesda Holdings Limited / Solomon Capital Enterprises / Oaklands / Kinross Ligier JS F3, Hyman set a blistering pace in Race 1 to take the victory with a 10.831-second margin.

“That was hard; that was really tough,” said Hyman after climbing from his car. “The degradation on the tire was really high. We started the race running like mid-1:18 laps, at the end I was doing 1:21s, but I was pushing. The wind increased throughout the race. My engineer was on the radio telling me the wind was increasing, so I would be aware of it, but you could feel it in the car. It was tough out there.”

With Hyman atop the podium, Dylan Tavella (No. 14 Crosslink Kiwi Motorsport Ligier JS F3) did his best to keep the points race as tight as possible. After lining up third, Tavella got the perfect launch off the line, minimizing wheel spin on his Hankook tires to overtake his teammate, Ryan Yardley, heading into Turn 1. Unable to regain the position, Yardley settled into third place in his No. 78 Crosslink Kiwi Motorsport Ligier JS F3—the same place he was scored when the checkered flag waved. The result marked Yardley’s second podium of the 2022 FR Americas season.

A full run-down of the provisional results from Race 1 are available, here.

FR Americas returns to the track later today for Race 2 with lights out scheduled at 5:10 p.m. ET. The championship will wrap up their New Jersey SpeedTour weekend with Race 3 tomorrow at 11:20 a.m. ET. Follow @FRAmericas on Facebook, Instagram and Twitter for updates, or use Race Monitor to follow live timing and scoring.