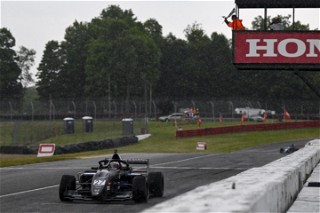 LEXINGTON, Ohio (June 26, 2022) – Raoul Hyman, driver of the No. 27 Bethesda Holdings Limited / Solomon Capital Enterprises / Oaklands / Kinross Ligier JS F3 for TJ Speed Motorsports, had a perfect weekend at Mid-Ohio Sports Car Course with Formula Regional Americas Championship Powered by Honda (FR Americas). The 26-year-old paced practice and qualifying, before leading every race from lights to flag to earn maximum points on the weekend. Strategy played a key factor in Race 3 with rain in the vicinity and teams having to choose whether to start the race on wet or dry tires.

Hyman was one of eight drivers to start the race on rain tires, with the other four starting the race on slicks. At first, Hyman doubted whether rain tires were the right decision—especially with Mac Clark (No. 25 Future Star Racing Ligier JS F3) starting next to him on dry tires. While Clark raced conservatively in the opening laps, Hyman knew it was imperative to gain as much of an advantage as possible while the track was still damp. Hyman opened a 21.076-second advantage by the halfway mark. At the same time, Clark was starting to notice an advantage of his own, continually logging lap times faster than his competitors.

Clark moved up as high as the third position before any advantage of slick tires was harshly erased with rain on the final two laps of the race. A steady drizzle started on the white-flag lap, but that quickly transitioned to heavy rain for the final lap. As three cars running slicks—including Clark—all spun on the final lap, Hyman tested the grip of his rain tires and sailed away to his sixth victory in the 2022 FR Americas season.

“Three out of three—let’s go,” exclaimed Hyman as he climbed from the cockpit. “That race was cool. We had a lead, but I knew there were guys behind me on slicks. I knew Dylan was behind me because he was on wets, but I figured when the slicks come in, usually they’ll be like eight seconds faster. So, when they told me the gap was 18 seconds, I figured ‘okay, that’s three laps, and they’ll be on you and they’ll pass you. So, just keep going.’ Then the rain came down at the end. I had a big mouth at the start and said that we should’ve gone with slicks, but the team kept me in check and I don’t have much to say about it now.”

A full run-down of the provisional results from Race 3 are available, here.

FR Americas returns to the track next month for the New Jersey SpeedTour at New Jersey Motorsports Park, July 29-31. Tickets for the event are available now at NJMP.com/SpeedTour. Fans can replay the live stream of today’s races on SpeedTour TV’s YouTube page at YouTube.com/SpeedTourTV