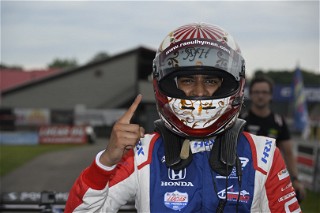 LEXINGTON, Ohio (June 26, 2022) – In just eight races to date in the 2022 Formula Regional Americas Championship Powered by Honda (FR Americas) season, Raoul Hyman has already claimed the top step of the podium five times. Driving the No. 27 Bethesda Holdings Limited / Solomon Capital Enterprises / Oaklands / Kinross Ligier JS F3 for TJ Speed Motorsports, Hyman has been flawless this weekend—leading practice and qualifying, and now winning both Races 1 and 2 while pacing the field from lights to flag on the challenging Mid-Ohio Sports Car Course.

“My car really suits the track,” said Hyman on the podium. “It’s a really rewarding track. When you finish the race, there’s a lot of adrenaline and it’s nice to let that go when you cross the line. Driving the car around here is what drivers dream about. It’s what they want to have to compete with. When you can drive a car like this, at this level, everything just becomes a lot easier. I’m just really grateful for where I am, to be here with TJ Speed and to be able to drive these cars.”

Race 2 had an unconventional start after Hayden Bowlsbey (No. 3 Save22 / Southern Linac LLC Ligier JS F3) suffered a mechanical failure coming to the grid.  Aborting the series’ traditional standing start, the field filed behind the safety car, and lined up two-by-two for a rolling start. Everyone sailed cleanly through Turn 1 and began to focus on hitting their marks and setting their pace. As the race reached the halfway point, Hyman had opened up a 5.182-second lead. While Hyman led, Mac Clark (No. 25 Future Star Racing Ligier JS F3) steadily followed in second—holding his start position all the way to the checkered flag. Meanwhile, teammates Jason Alder (No. 77 Drive for Diabetes Awareness / HAKUN / TJ Speed Motorsports Ligier JS F3) and Nick Persing (No. 29 OPI Commercial Builders / TJ Speed Motorsports Ligier JS F3) battled for the third position. Persing had rolled off fifth, but he was able to work his way into the fourth position by the end of lap 1, and overtook the third position by lap 6.

A full run-down of the official results from Race 2 are available, here.

Lights out for #FRAmericas Race 3 is scheduled for 5:10 p.m. ET.  Race 3 will be available for live streaming on the SpeedTour TV’s YouTube page at YouTube.com/SpeedTourTV.