Raoul Hyman Opens Mid-Ohio with a Win in Race 1 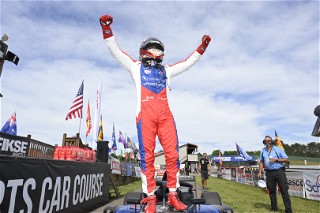 Hyman’s race was not all easy, though. The driver struggled with grip early, and was running lap times over a second slower than yesterday’s qualifying. Despite that, Hyman opened up a 4.5-second lead over the field. But adversity struck once again and Hyman’s advantage was erased when a full-course caution came out with just over 12 minutes remaining in the race. With the field regrouped and the green flag waving, Hyman had another strong start to once again pull away with less than four minutes remaining in the race.

“That was a tough one, honestly,” said Hyman after climbing from the car. “The start of the race, the grip level was just really low. I looked at the lap times a couple times at the start, and I think we were something like two seconds off what we were used to doing. I think it had something to do with the temperatures being really hot or rubber from other cars. I was driving around sideways, and it was quite tough.  I also knew that a couple guys behind me put four new tires on, and we didn’t have any tires. With pole for Race 2 being based on fastest laps, we needed to have strong pace. I’m really grateful that we did actually have the pace and that we were able to win the race and get the fastest lap, as well.”

Behind Hyman is where things got interesting. When the race restarted with less than four minutes remaining, Jason Alder (No. 77 Drive for Diabetes Awareness / HAKUN / TJ Speed Motorsports Ligier JS F3) led Dylan Tavella (No. 14 Crosslink Kiwi Motorsports Ligier JS F3) and Nick Persing (No. 29 OPI Commercial Builders / TJ Speed Motorsports Ligier JS F3). Persing, unwilling to settle for fourth place, turned up the heat on the competition when the race restarted. With a bold pass in the Keyhole, Persing overtook Tavella and moved into the third position. Already in position for a spot on the podium, Persing kept his attention forward and set his sights on Alder. Just one lap later, Persing chased Alder down on the backstretch before making his move to overtake the second position, working Turns 4 and 5. At the same time, Ryan Yardley (No. 78 Crosslink Kiwi Motorsport Ligier JS F3) pulled next to fourth-place Tavella and overtook the position.

As they crossed the finish line, it was Hyman leading the field, followed by Persing, Alder, Yardley and Tavella. A full run-down of the official results from Race 1 are available, here.

FR Americas returns to the track tomorrow for Race 2 at 10:10 a.m. ET, followed by Race 3 at 5:10 p.m. ET.  Race 3 will be available for live streaming on the SpeedTour TV’s YouTube page at YouTube.com/SpeedTourTV.