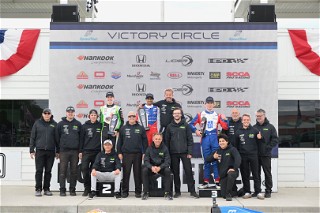 PLYMOUTH, Wis. (May 22, 2022) - TJ Speed Motorsports claimed all three podium positions for the first time this Formula Regional Americas Championship Powered by Honda season to extend their lead in the team championship standings.

Continuing his show of dominance from pole position Raoul Hyman, driver of the No. 27 Bethesda Holdings Limited / Solomon Capital Enterprises / Oaklands / Kinross Ligier JS F3, pulled away from the rest of the grid immediately from lights out.

“I’m really happy, and to have all the guys up here, I mean everyone was working really hard on Nick [Persing's] car right until we had to go,” Hyman said as he took his place at the top of the podium. “We finally put a smile on Tim’s [Neff, team owner] face.  I’m really happy with that. I’d like to thank the boys, they’ve done a great job. Honestly, they have really put together three amazing packages.”

Dylan Tavella (No. 14 Crosslink Kiwi Motorsport Ligier JS F3) fought and maintained the second position until a mistake in lap 6 ran him wide, opening the door for Jason Alder, (No. 77 Drive for Diabetes Awareness / HAKUN / TJ Speed Motorsports Ligier JS F3) to move up to second. Right behind, in third, Nick Persing (No. 29 of the OPI Commercial Builders Ligier JS F3) fought his way through the pack from the seventh position into the final podium spot, while setting multiple fastest laps on his Hankook tires.

The battle for third continued throughout the race, as Tavella recovered to apply pressure to Persing. As the race clock ticked down, Tavella was starting to close the gap between himself and Persing. Going into the final lap, the gap between Persing in third and Tavella in forth was down to half a second. Ultimately, Persing defended his position against Tavella and claimed the final podium position to complete the TJ Speed Motorsports sweep.