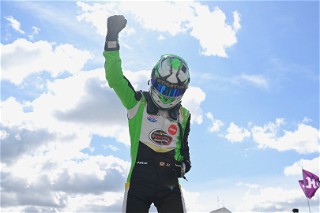 PLYMOUTH, Wis. (May 22, 2022) – Jason Alder, driver of the No. 77 Drive for Diabetes Awareness / HAKUN / TJ Speed Motorsports Ligier JS F3, earned his first Formula Regional Americas Championship Powered by Honda (FR Americas) win of the 2022 race season this morning at Road America. The Cooksville, Md., native put himself in the catbird seat to take over the lead with just two laps remaining in the race.

“It was definitely a tricky race for sure,” said Alder from the podium. “It was very up and down. Sometimes it was looking really good, sometimes maybe not so much. We had a little bit of contact in Turn 1 on that restart that made us lose a position or two. Fortunately, we were able to come back up to the front, and when the opportunity presented itself, we were there to take advantage of that. So, I’m really happy that we were able to bring a one-two home for the team, and I’m really looking forward to trying to get a one-two-three with Nick [Persing] on here, as well. All-in-all, just grateful to win.”

Initially, it looked like the race would be a carbon copy of Race 1 with a dominant start by Raoul Hyman (No. 27 Bethesda Holdings Limited / Solomon Capital Enterprises / Oaklands / Kinross Ligier JS F3) from the pole position, who opened a sizable lead during the early laps. However, coming to two laps to go, Hyman bumped the wheels on entry to spin in Turn 14. Fortunately, given the lead he had built up prior to the spin, Hyman was able to regroup and rejoin the race in the second position.

FR Americas is back on track today at 1:55 p.m. CT for their third and final race of the weekend. A live feed of the Road America Jumbotron is available on SpeedTour TV’s YouTube page at YouTube.com/SpeedTourTV.