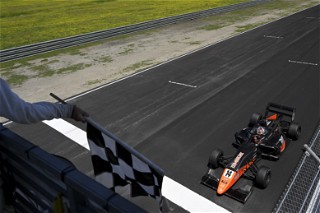 AVONDALE, La. (April 10, 2022) – Dylan Tavella, driver of the No. 14 Crosslink Kiwi Ligier JS F3 led the field to the checkered flag for Formula Regional Americas Championship powered by Honda (FR Americas) Race 3 at NOLA Motorsports Park. After finishing third and second, respectively, in the first two races of the season, Tavella finally climbed atop the podium in the weekend’s final race.

Rolling off in the third position, Tavella pushed his brakes and Hankook Tires to the limit, making a charge to the front in the opening laps. First racing Nico Christodoulou in the No. 22 VRD Racing Ligier JS F3 for second, and then setting on after Hyman in the No. 27 Bethesda Holdings Limited / Solomon Capital Enterprises / Oaklands / Kinross Ligier JS F3.

“It was pretty crazy the first couple laps battling with Raoul [Hyman] and [Nico] Christodoulou,” said Tavella, walking us through the battle. “Going into [Turn] 1, me and [Raoul] rode fairly deep—both well past our braking zone—but we still made it stick. I went around on the outside, I had to put a couple wheels in the dirt, and then we just charged all the way into [Turn] 2, three wide. Then, I had to out brake both of them and that was kinda sketchy.”

By lap 2, Tavella was scored in first and never looked back while pacing the field.

Meanwhile, Jason Alder started the race second in his No. 77 Drive for Diabetes Awareness / HAKUN Ligier JS F3 for TJ Speed Motorsports, but he dropped back to fifth as the race got underway. With a steady pace, he continued to improve his position and moved into second—a position he held until the checkered flag—by Lap 18.

Hyman finished third after starting the race on the pole. Emerging from the car after the race, he found a broken right front wing, which explained his difficulties during the race.