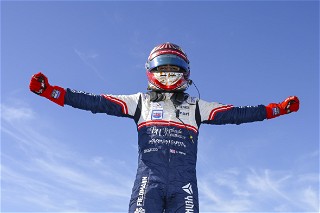 AVONDALE, La. (April 10, 2022) – Raoul Hyman recorded his first win in the Formula Regional Americas Championship Powered by Honda (FR Americas) on Sunday morning at NOLA Motorsports Park. The 25-year-old South African driver got a successful jump as the lights went out for Race 2, and went on to lead lights to checkers in his No. 27 Bethesda Holdings Limited / Solomon Capital Enterprises / Oaklands / Kinross Ligier JS F3 for TJ Speed Motorsports.

“It was a great start,” said Hyman as he climbed out the car. “After yesterday I was pretty annoyed that my start let me down because I thought we had great pace in the race. I was quite happy with the start. I was challenged into Turn 1, but it was under control. So that was good. From there it was just managing. You can see that my lap times kind of fluctuated quite a bit, so after I built a gap, I was on the radio with my engineer, Tim, and we just managed it from there on in. It was a good race all-in-all. I’m happy we were able to manage it and come away with our first victory of the series.”