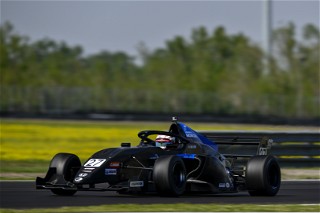 AVONDALE, La. (April 9, 2022) – Mac Clark made his Formula Regional Americas Championship Powered by Honda (FR Americas) debut at NOLA Motorsports Park on Saturday afternoon, and he did it in winning fashion. The 18-year-old Canadian took the lead in his No. 25 Future Star Racing Ligier JS F3 on the first lap, and led all the way to the checkered flag in a race that stayed green from start to finish.

Raoul Hyman was also making his FR Americas series debut and qualified on the pole in the No. 27 Bethesda Holdings Limited / Solomon Capital Enterprises / Oaklands / Kinross Ligier JS F3 for TJ Speed Motorsports, but it was Clark who was quick off the line. Clark overtook Hyman before they reached the first turn and never looked back.

“It feels amazing,” said Clark as he climbed out the car. “To come to the championship and win the first race with a brand new team—and me being a rookie in the series—I just want to give so many thanks to Future Star Racing. Mr. and Mrs. McAlister, thank you so much for believing in me. I didn’t know who was going to be fast all race. I actually made a really good jump off the line like we’ve been practicing, and from there it was just keeping my head down and hitting my marks.”