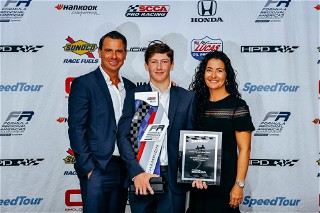 As part of his championship winnings, Kyffin was awarded a scholarship worth $600,000 by Honda Performance Development and Honda Motor Company towards participation in the 2022 Super Formula series. Successful graduates of Super Formula include Pierre Gasly and Honda-powered 2021 NTT INDYCAR SERIES champion Alex Palou.

Despite a dramatic incident in Friday’s Race 1 with championship rival Joshua Car, Kyffin’s nearest championship competitors were out of mathematical contention, securing the title early in the weekend. He went on to race unchallenged from pole position on to score his sixth win of the season, before holding off a charging Dylan Tavella in a thrilling season-ending race to score his seventh victory of 2021.

Arriving at COTA after a bumper week of Indy Lights testing and HPD GT3 Academy graduation, Kyffin echoed his mantra of taking each race as it comes, hoping to enjoy another successful weekend. His 65-point series advantage required only 11 additional points in Race 1 – or for Joshua Car not to score – for Simpson to win the title on Friday.

After a short delay to the start of Race 1, the FR Americas field executed a rare rolling start to proceedings and Kyffin took full advantage. Thanks in part to the techniques learned in the HPD GT3 Academy, Kyffin was able to prime his car to perfection and pull away from the pack into Turn 1. Once the field had settled, championship rival Joshua Car closed on Kyffin, finally challenging for the lead on Lap 5. Unfortunately, the front right wheel of Car’s Crosslink machine touched Kyffin’s rear left, pitching the Cayman driver into a spin and damaging both cars’ front wings. After a short stop for repairs, Simpson resumed the race to finish 11th, crucially scoring the fastest lap to secure pole position for Race 2.

Race 2 was a straightforward affair by comparison. This time from a traditional standing start, Kyffin’s getaway was good, but not as good as Ernie Francis Jr.’s on the outside line. The #98 Future Star driver took the lead ahead of Kyffin into Turn 1, but his lead would prove to be short-lived as a mechanical issue forced Ernie to pit in the opening laps. Now leading, Kyffin deployed electric pace to win by a stunning 13.5 seconds over second-placed TJSpeed teammate Varun Choksey. Unsurprisingly, Kyffin would also secure pole for the final race of the 2021 season with the fastest lap of Race 2.

Almost the opposite of Race 2, Saturday afternoon’s Race 3 provided a grandstand finish with Simpson once again demonstrating mental strength and consistency. Promising racer Dylan Tavella chased Kyffin away from the line on Lap 1 and threw everything he could muster at the leading #21 car, before settling in to conserve his tires for an assault on the last lap of the race. The two would go on to extend a considerable gap over the rest of the field, with Simpson maintaining strong pace despite covering Turns 1 and 12 from any potential late move from car #14.

At the white flag, Tavella closed on Simpson through the hairpin of Turn 11 to slipstream down the back straight, managing to pass Kyffin on the inside but going deep into the corner. Through Turns 12, 13 and 14, the cars continued to swap places as one went deep, then another, before Kyffin finally emerged ahead in Turn 15 to secure victory.

Kyffin finished the 2021 FR Americas season with 314 points, almost 100 clear of Joshua Car in 2nd with 218. SRX and Trans-Am racer Ernie Francis Jr. rounded out the top three with 160 points.

“What a way to end the season. I’m glad we got some more wins this weekend after a tough Race 1. Dylan [Tavella] pushed me hard today – I think that’s the hardest I’ve ever had to work for a race win!”

“The whole TJSpeed Motorsports crew have worked so hard this year to give me a great car. I don’t think anyone expected us to fight for the title at the beginning of the season, but we’ve been fast at every track and I think our consistency is our greatest strength.”

“I’d like to thank God for supporting me on this journey, my family, my sponsors, Tim and the team, Honda and HPD, and of course the FR [Americas] series for putting on a great championship for us. I’ve really enjoyed the racing this season and I’m thankful for the opportunity to show my talent alongside these great drivers.”

“Kyffin has just been spectacular this year. It’s easy to forget how young he is. We had a dream start to the season with a clean-sweep, and every weekend since we’ve been right up there. Varun, Logan and Baptiste all did a great job and we’ve built an awesome group around our drivers to get the most out of them. FR Americas and Parella should be proud of the series we ran this year despite the challenges.”