NEWS FLASH: Kyffin Simpson goes out on top with the Championship and Race Win in the final race of FR Americas’ 2021 Season 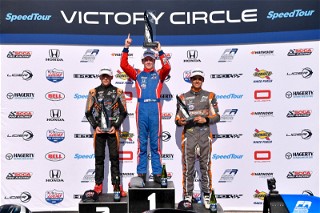 AUSTIN, Texas (November 6, 2021) - Kyffin Simpson made it two-for-two in Saturday’s races at Circuit of The Americas (COTA) with the Formula Regional Americas Championship Powered by Honda. The 17-year-old driver led the field from start to finish to take his seventh victory of the 2021 season and close out his championship year.

“It was a tough race,” said Simpson, driver of the No. 21 TJ Speed Motorsports / Simpson Race Products / GoPro / Spy Optic Ligier JS F3. “Dylan was on me the entire time and I just couldn’t pull a gap. Every time I tried, I just overheated the tires and would fall back even more. It was just such a good race and awesome to have that battle at the end. I’d like to thank God, the whole team, all my sponsors and my family.”

The 2021 season marked Simpson’s first full year of competition in FR Americas, after racing in a handful of events during the 2020 season.

“This year has been a lot of fun,” Simpson said following the race. “I’ve learned a lot about downforce cars and higher horsepower cars running FR Americas. Higher downforce is a big part of racing in IndyCar, F1 and many other series, so it’s always important to know how to race with downforce. It’s been great to learn everything that I have with FR Americas. It’s been an incredible season, and it’s awesome to come home with the championship.”

After suffering a mechanical issue during the formation lap, Dylan Tavella did not compete in Race 1. However, with his No. 14 Crosslink Competition / Crosslink Coatings Ligier JS F3 fixed and ready for Saturday’s races, Tavella found himself with a competitive advantage—Hankook Tires that were a full race fresher than all of his competitors. As a result, he secured the second starting position and never let off with the pressure on Simpson. Consistently running within just a few tenths of each other, the top two were side-by-side on the final lap. Tavella attempted a pass for the win in Turn 12 on the final lap, but Simpson ultimately held on to take the checkered flag. A hard-fought second place earned Tavella the Omologato Perfectly Timed Move of the Race award, and a beautiful Omologato bespoke timepiece complete with the FR Americas logo.

“My tires were heated up at the beginning of the race, so I hung back for a little bit before taking another go,” said Tavella after the race. “I absolutely gave it everything; I knew I was going to regret it if I didn’t go for it on the last lap that far back. I knew I wasn’t going to take him [Simpson] with me if I did a stupid move. I tried to make it stick, but he did the ol‘ switcher-roo and we went into Turn 13 and it was the same thing again, we flipped back places. I want to thank my entire team who put in a massive amount of work last night after we had some issues yesterday. My mom and dad, thank you very much. Hopefully, we will do even better next year.”

Runner-up of the 2021 Formula Regional Americas Championship Powered by Honda, Joshua Car put his race craft on display in the final round of the season by starting 11th and finishing third on the podium. The result marked the ninth podium of the season in the No. 9 Crosslink Competition / Crosslink Coatings Ligier JS F3 for the Australia native.

“It was a really fun race,” Car said from the podium. “The team gave me a great car for the final round, and we managed to go through the field early on with a lot of passing, which was a lot of fun. We had great speed in the Crosslink Coatings machine. Thank you to the whole team and all my supporters for coming out. I love having everyone around, so thank you so much.”

FR Americas will kick off their 2022 season with the SpeedTour Cup Invitational at Michelin Raceway Road Atlanta on March 24-27, 2022.