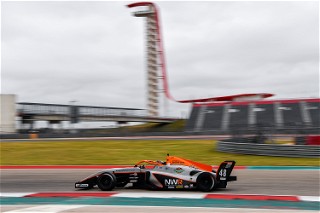 MUNDELEIN, IL (November 3, 2021) – ­­­­­­­­­­­­­­ After a six-week break in the action since the last event of the 2021 Formula Regional Americas Powered by Honda season, Newman Wachs Racing heads to the Circuit of the Americas in Austin, Texas this weekend for the tripleheader season finale. The team enjoyed significant success last year at the COTA venue, with Victor Franzoni scoring three podium finishes on the 20-turn, 3.427-mile road course that hosts Formula 1 annually. Looking to continue the NWR squad’s success in Texas, American Jordan Missig is aiming to continue what has been a great season thus far. Missig scored his first career FRA series win at VIR in September and has five additional podiums which puts him fourth in the championship standings, just one point behind third. Jordan’s extremely focused on securing more victories to add to his resume and the team will use their knowledge from last year to put him in the prime position to achieve that goal.

“I’m really looking forward to wrapping up the 2021 FRA season at the Circuit of The Americas this weekend with Jordan,” commented Team Manager Brian Halahan. “He’s currently fourth in the driver standings, so we are heading into the weekend with one goal, and that is to win races. After VIR, he knows he can win, and we know he can win.”

The team will participate in two unofficial tests on Thursday, November 4, leading up to their official practice later in the afternoon. Friday’s schedule (November 5) includes the series’ only qualifying session early in the morning, followed by Race 1 later in the afternoon. Saturday’s schedule (November 6) kicks off with Race 2 in the morning at 10:00 am CT, followed by Race 3 in the afternoon at 2:35 pm to wrap up the weekend. Live timing will be available on the series website (www.framericas.com) and the Race Monitor app.