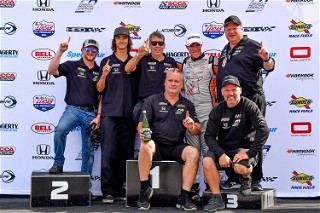 American Jordan Missig captures his first win of the 2021 season

ALTON, VA (September 26, 2021) – After an over two-month long summer break in the Formula Regional Americas Championship Presented by Honda schedule, Newman Wachs Racing headed to the 3.27-mile, 17-turn purpose-built road course at ViRginia International Raceway in Alton, Virginia this past weekend. The team unloaded on Thursday for unofficial testing and were immediately fast and they backed that up during the official practice, qualifying, and races. American Jordan Missig, 23, dominated the opening race of the tripleheader to capture his first FR Americas career win and followed that success with another podium in Race 2, his fourth for the season.

“I think the results this past weekend at VIR should speak for themselves,” offered Brian Halahan, NWR Team Manager. “Jordan had a breakthrough weekend and all the hard work over the last year is starting to show how he is growing as a driver. He walked away from the field in Race 1, had two front-row qualifying results, and led the majority of Race 2 to finish up with his fourth podium of the season, finishing in third place. I want to give lots of credit to the team as they worked hard and provided Jordan with a great car.”

The Formula Regional Americas Championship series took to the rolling hills of VIR on Thursday for four unofficial practice sessions in preparation for the weekend’s official events. Friday morning kicked off with their lone official practice, followed by qualifying. Missig topped the charts most of the session, however, he was narrowly beat for the pole at the very end of the session to finish second, which put him off-pole on the front row for Saturday’s Race 1.

Saturday began with Race 1 and from the drop of the green, Missig launched off the line to take the lead. He dealt with some pressure at the beginning of the race, but then began to pull away every lap, winning with a commanding lead of 5.7 seconds. This was the first win of his FR Americas career. Later in the afternoon, Race 2 took place under a shady and cooler track. Missing started on the pole after setting the fastest lap in Race 1 and he again managed a fantastic start, taking the lead from the get-go. However, due to two full-course cautions and restarts with extremely tough competition, Jordan was unable to maintain his lead but only fell back to the third position, giving him his fourth podium of the season and much-needed championship points.

Unfortunately, Sunday didn’t go the way the NWR squad would have liked. After starting in the seventh position, Jordan was in heated battles with numerous cars throughout the race. After working his way steadily up to fifth position, he was hit off the track by another driver with three laps to go. Although it did not end the way it started, Missig improved his championship standings, moving up one position into fourth place overall, only one point behind the third position. The team is extremely proud of Jordan and look forward to the finale.

The Newman Wachs Racing crew will now spend the next six weeks preparing their Formula Regional Americas cars for the season finale at Circuit of The Americas in Austin, Texas on November 5-7, an iconic road course in America. They will fight hard for more wins, podiums and to move up the championship standings.