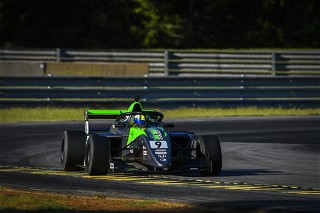 Joshua Car set the fastest lap during Friday’s qualifying session at VIRginia International Raceway with a 1:44.273 for the Andy Scriven Memorial Weekend.

The action got exciting just past the half-way mark when rookie Ryan Yardley took the top spot in his No. 78 Kiwi Motorsport/Helmet House machine. Car responded the same lap in his No. 9 Crosslink Coatings Ligier JS F3.

Jordan Missig, driver of the No. 48 Autobahn Country Club Newman Wachs Racing car jumped up to the pole position on lap 8 with Yardley close behind, but they were no match for the the 2019 F4 U.S. Champion, Car, who’s lap around the 17-turn, 3.27-mile circuit on lap 9 earned him the first starting position for Saturday morning’s race.

“It was a great lap,” Car said. “We managed to just clip our rivals, so we’re very happy with that. It’s our third pole in a row, so the car’s been really rolling lately. We’re gonna keep that up and keep everything going for Race 1 and try and win from pole.”

Missig and Yardley round out the top three with times of 1:44.438 and 1:44.480 respectively. Ernie Francis Jr will start fourth and points-leader Kyffin Simpson will start fifth.