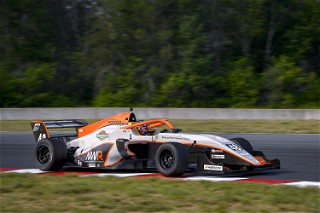 MUNDELEIN, IL (September 23, 2021) – After almost two months off since the last three rounds of Formula Regional Americas Championship Powered by Honda at Brainerd International Raceway, and with the next event coming this weekend, Newman Wachs Racing will head to Virginia International Raceway on September 23-26. The series will take to the track for three rounds on the challenging 17-turn, 3.27-mile purpose-built competition road course. The team is coming off a successful outing at Brainerd, where they grabbed their second FRA win with Ian Rodriguez. The Guatemalan driver will not be in action at VIR, so American Jordan Missig will lead the team into competition. Missig is focused on bouncing back after a rough weekend at Brainerd and is focused on gaining crucial championship points and the elusive win he has been seeking all season.

“We will be down to one car for this event due to budget issues with Ian, so he will not be able to continue,” commented Team Manager Brian Halahan. “We will be putting our full focus on Jordan, and I expect to have a very strong weekend. Last year, he got his first podium here at VIR and he was also   the quickest car at the series test earlier this year, so I think we’ll be looking good for more podiums.”

The team will participate in four unofficial tests on the Thursday, September 23 leading up to the event. Friday’s schedule (September 24) includes their first official practice session in the morning, with qualifying later that afternoon. Saturday’s schedule (September 25) kicks off with Race 1 in the morning at 10:25 am EDT, followed by Race 2 in the afternoon at 4:15 pm. Sunday will wrap up the tripleheader event with Race 3 at 2:45 pm. Live timing and scoring will be available on the series website (www.framericas.com) and the Race Monitor app. Live video will be provided on the SVRA app for the three races.