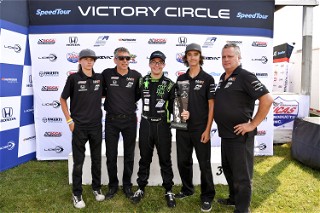 After two weeks of preparation in the team shop after the last Formula Regional Americas Championship Presented by Honda event, Newman Wachs Racing headed to the 2.5-mile, 13-turn purpose-built road course at Brainerd International Raceway in Brainerd, Minnesota this past weekend. The team’s drivers and crew were met by high temperatures, but the entire NWR family immediately got down to business, topping the charts in Practice 1 thanks to Guatemala’s Ian Rodriguez. Ian kept up this pace all weekend and, as the high point of the event, scored his first win of the 2021 season in the opening race of the tripleheader. Illinois’ Jordan Missig showed pace throughout the weekend as well, however, luck was not on his side. Jordan’s highest finishing posIiton was fourth in the opening race, which provided him with crucial championship points.

“I am so happy for Ian getting his first win and another win for the team,” offered Brian Halahan, NWR Team Manager. “He drove a great race and put himself in a good qualifying position for Race 2, but unfortunately, he got T-boned and taken out in the first corner and fell back to last. His drive back to fourth was very impressive. In Race 3, he had a failure with a part on the engine with four minutes remaining in the race and that ended of his day while he was closing in on third place for another podium finish, which was unfortunate. Jordan had a great race going on in the first race running second for most of the race until he made a mistake and dropped back to fourth which was still a good result. In Race 2, he was taken out by another driver and that ended his race early on, which again was an unfortunate event for my team. The team got his car put back together for Race 3, but unfortunately, we let him down as something was not tightened properly and he had to make a pitstop on lap one to fix the issue and went down three laps, so he had a weekend we would much rather forget. We will move on to some testing over the next month and a half to prepare for VIR.”

The Formula Regional Americas Championship series took to BIR on Friday for three unofficial practice sessions in preparation for the afternoon’s official practice. Saturday morning started nice and early with the drivers’ second official practice, which was followed by qualifying later in the morning. Both drivers were on a mission from the drop of the green flag in qualifying, flirting with the top-three starting positions. When the 25-minute session concluded, Rodriguez had snagged the second starting position for Race 1, while Missig was not far behind in fourth, putting both NWR drivers within the front two rows. Later that afternoon, Race 1 took place under the bright sun and high temperatures. Right away, Rodriguez took a commanding lead and then he continued to pull away throughout the race, locking in his first FRA career win. Missig was involved in a heated battle for a podium position, but a mid-race miscue caused him to fall back to fourth, where he would finish.

Saturday morning began on Race 2 of the tripleheader. Rodriguez started on the outside of the front row, but he was t-boned into the first turn and was forced off-track by Dylan Tavella. This contact dropped Ian to the tail of the field. While working his way forward, Missig was also hit, and Ian was almost collateral damage again. Unfortunately for Missig, his car suffered too much damage to continue after that incident. After a full-course caution, Ian immediately jumped into action, picking off cars one by one as he moved to the front. He fought hard and worked his way back to finish in the fourth position, which was a strong recovery.

Later in the afternoon, Race 3 took place with Rodriguez starting on the inside of the second row. Missig rolled off from the ninth position. Unfortunately, Missig was immediately hampered by a mechanical issue that required a trip to pit lane to repair the problem. Although he went three laps down, he was still able to get himself back up to eighth, which delivered a few championship points. Back up front, Rodriguez began to fight for another podium position, but with four minutes to go, he had a part failure in the engine that ended his run. Overall, the team is proud of their second win of the season and will look to continue that success at the next event.

The Newman Wachs Racing crew will now spend the next two months to prepare their Formula Regional Americas cars for the next event at the beautiful Virginia International Raceway on September 24-26, a track where they enjoyed success last season.

Driver Quote: “It was a pretty disappointing weekend, I must say. Leading up to the races, it looked like it was going to be a very promising weekend, but my luck ran out. Race 1 was going well until I made a mistake which I am still scratching my head about. In Race 2, I got taken out just six corners in and, in Race 3, I just had no luck at all. I do want to thank the NWR guys for staying with me and fighting until the very end of the weekend. One thing is for sure, we will bounce back at the next one and we will bounce back strong.”

Driver Quote: “I am very happy to have won my first victory in FRA and for the team. I thank God very much for the opportunity it gives us to be here, and I thank everyone who made this possible. We have to keep working hard to get more victories, as we have a lot to learn and a lot to give.”