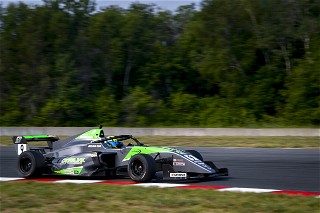 Joshua Car brought the heat during the Formula Regional Americas Championship Powered by Honda qualifying session on Saturday morning at Brainerd International Raceway, setting a new track record on his way to claiming his second pole of the season.

Car shot to the top of the standings early before breaking his own fastest time a 1:22.635-second flyer on the sixth circuit in the No. 9 Crosslink Coatings machine.

"We had a really good session," said Car. "We managed to get pole by more than a half of a second ahead of the rest of the field. My teammate Dylan (Tavella) also got a great finish for the team.  We managed to get the car really dialed in to be really fast here.

"The track here is really cool," Car continued. "It is our first time here and it's got a real good mix of high-speed long straights, almost like a three-quarter oval around the back, it's got flowing esses and a nice fun bumpy change of direction on the front straight, which needs a lot of skill to maneuver around."

While more than a half of a second separated Car from his nearest rival, the next six drivers' times were decided by just .398-seconds.

Seven-time Trans Am champion Ernie Francis Jr. missed qualifying due to previous schedule commitments with the SRX Racing Series in Nashville, but he will return on Sunday for the final two rounds. Francis Jr. is the only driver on the FR Americas roster with experience at Brainerd, the Parella Diversity Scholarship recipient won last year with Trans Am.

Race 1 goes green at 2:20pm Central. All three rounds will be live streamed on the SVRA App: https://bit.ly/2UkA4Fy