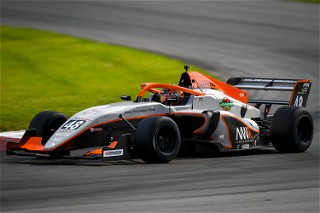 MUNDELEIN, IL (July 14, 2021) – It’s been just weeks since the last three rounds of Formula Regional Americas Championship Powered by Honda at Mid-Ohio Sports Car Course, and with the next event coming this weekend, Newman Wachs Racing will head to Brainerd International Raceway on July 16-18. The series will take to the track for three rounds on the 13-turn, 2.5-mile purpose-built competition road course. The team is coming off a very successful outing at Mid-Ohio, where they grabbed three more podium results, including their first FRA win with Jacob Abel. American Jordan Missig looks to back up his podium from Mid-Ohio with the goal of standing on top of the podium this weekend. Guatemalan Ian Rodriguez has his eyes set for more podiums to catapult him up the championship standings. Both drivers and the team are focused on making this the best weekend of the season, thus far.

“It should be an interesting weekend with it being a new track for all the drivers and teams,” commented Team Manager Brian Halahan. “It will be very important to get maximum track time during the test day so we can make sure both drivers are satisfied with their car set-ups. It should be a good weekend with everyone being on a level playing field.”

The drivers will participate in three unofficial test days on the Friday, followed up with official Practice 1 (July 16) leading up to the event. Saturday’s schedule (July 17) includes their second official practice session in the morning, with qualifying later that morning. Both will be followed up with Race 1 at 2:00 pm CDT. Sunday will wrap up the tripleheader with Race 2 at 9:00 am followed by Race 3 later in the afternoon at 1:25 pm. Live timing and scoring will be available on the series website (www.framericas.com) and the Race Monitor app. Live video will be provided on the SVRA app for the three races.

Quote: “It’s time for the second half of the season, and what better way to start it off than with a track I haven’t been to before. From watching videos and previous races at Brainerd, the track looks fast and fun to drive, so I am curious to see how our Formula Regional cars will race. But as we near the end of the season, I still have a shot at the championship, and I am still keeping my eye on the prize as the season winds down.”

Quote: “I am very happy to be back in the Newman Wachs Racing car this weekend. We trust in God that it’s going to be a good weekend. Thank you, to everyone that is making this possible for me.”