With a Podium at his Most Recent Race, Logan Cusson Eyes the Brainerd International Raceway 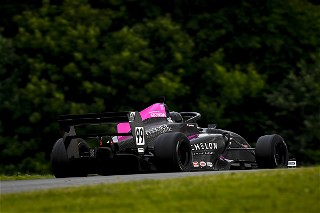 Fresh off a podium result at the famed Mid-Ohio Sports Car Course, Canadian Logan Cusson is headed north to Brainerd International Raceway in Brainerd, Minnesota. Set for rounds ten through twelve of the FR Americas Championship Powered by Honda, Cusson will be back behind his familiar Dickinson Wright, Peerage Capital and Echelon Capital Markets branded #99 TJ Speed entry with the goal to add to his podium total.

“Brainerd is a new track to the series, to me, and to the team,” explained Cusson. “I am not sure if many drivers have tested there so the playing field should be pretty level. With four of us in the TJ Speed program, we should have the ability to gain some good data early in the weekend.”

With two podiums and a handful of top-five finishes already to his credit this season, Cusson sits fifth in the championship points battle and a mere nine points away from third.

“Some good finishes in Minnesota will be critical to climb further towards the top,” explained Cusson.

Following the most recent FR Americas rounds in Mid-Ohio, Logan Cusson stayed on site to take in the sights and sounds of the NTT IndyCar Series and Road to Indy race weekend. Always looking to advance his knowledge, seeing cars on the track from different angles around the property opened his eyes for a return to the facility.

Cusson continued, “There are so many little things to learn in motorsports that any chance I can get, I take the opportunity. A huge thanks to HMD Motorsports and Global Racing Group for hosting me.”

Ready to attack the 2.5-mile layout, Cusson will have the opportunity to hit the track for a pair of test sessions and one official practice session on Friday, July 16th. Saturday will be the home of one final practice session, qualifying and the first race of the weekend while Sunday will be reserved for two more wheel-to-wheel races.