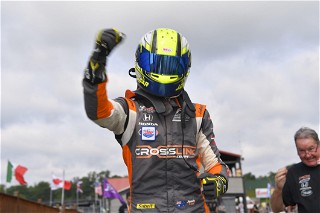 The 2019 F4 U.S. champion crossed the line in first at Road America but a post-race penalty took him off the podium.

Car held off a pressuring Jacob Abel for two restarts before securing the win. Abel, who is wheeling for Newman Wach Racing for a one-off event, had to settle for second. The two pushed each throughout the session, finishing nearly seven-seconds in front of third-place Jordan Missig.

"That was a great win and confidence boost for the whole Crosslink team," said Car. "Jacob (Abel) is a tough competitor but we raced clean and once I had him on the restart, I knew this was our race to win."

Off the the F1-style standing start, going for the lead  Ernie Francis Jr spun in Turn 3, falling back to last place.  The PMH Diversity Scholarship recipient eventually worked his way to fifth-place recovery. Francis Jr. is the winningest driver in Trans Am at Mid-Ohio.

Kyffin, trying to make up for a poor qualifying, got from 10th to 8th, but went off on lap 4, bringing out the first safety car.  Rejoined laps down, set second fastest lap on lap 15.

On the restart, Ian Rodriguez went to battle with Christian Bogle for fifth but went off in the process, bringing out the second safety car on Lap 6.

Dylan Tavella, running fourth for most of the race, developed a problem on Lap 13, was forced to pit for repairs, eventually finished two laps down.

The F4 U.S. drivers have a full day on Sunday with a double-header to finish out the Vintage Grand Prix of Mid-Ohio weekend. The full event is live streamed on the SVRA App: