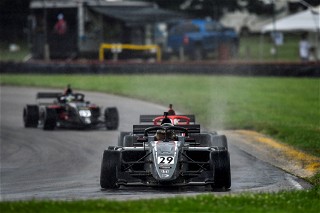 The grid for Race 1 will be set based on Practice results from earlier in the day. Securing the fastest time in practice with a 1:19.670-second lap, Joshua Car will start on pole for Saturday's race.

"I am very excited to be starting on pole for tomorrow’s race," said Car. "We were very fast in this mornings session, so we will be looking to build on that for tomorrow and challenge for the win. Crosslink Competition keeps putting in the hard work to keep us up front."

Joining Newman Wachs Racing this weekend is Jacob Abel. Just .111-seconds off Car's fastest time in practice with a 1:19.781-second flyer, Abel will start on the front row in second in the No. 51 Abel Construction machine.

Wheeling the No. 98 Future Star Racing Ligier JS F3, ironman Ernie Francis Jr. (1:20.212-seconds) will take the green from the second row on Saturday in third, his best starting position of the season. Francis Jr. is pulling triple duty this weekend. On top of his three FR Americas rounds, Francis Jr. will also compete in the Trans Am Series at Mid-Ohio as well as running with SRX in the dirt on Saturday at Eldora Speedway.

Positions fifth through 11th were decided by just .637-seconds.

Saturday opens with FR Americas  at 9:40am Eastern for Race 1 followed by two additional rounds )(10:20am, 5:00pm) during the Vintage Grand Prix of Mid-Ohio finale.

Watch the races live by downloading and subscribing to the SVRA app: https://bit.ly/3qrsKDI