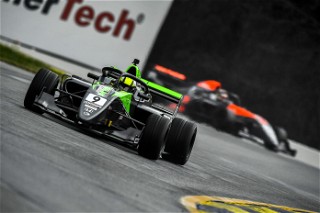 Car and Tavella in FR with Gardner, Shehan and Russell in F4

June 24, 2021 – Just as they did at Road Atlanta, Team Crosslink will enter five drivers at the Mid-Ohio Sports Car Course this weekend. Taking on both the F4 United States Championship and the FR Americas Championship Powered by Honda, the Texas based program will look to continue their podium presence.

“It was great to have a good weekend on the result sheet at the last event, but we are fully focused on this upcoming weekend,” expressed Sean Owens. “After this race, the season will have reached the halfway point so we will get to see exactly where we stand in the championship battles and evaluate what we need to do for the second half of the year.”

With race wins in FR Americas to their credit in 2021, Joshua Car and Dylan Tavella will be back at the famed Mid-Ohio Sports Car Course to try and put Team Crosslink at the front of the field. In the F4 Championship, Ryan Shehan scored his first career point at Road America and will look to build on that in Lexington, Ohio as fellow Rookie Trevor Russell aims to advance up the running order and make a potent one-two threat for Team Crosslink. Rejoining Team Crosslink for Mid-Ohio will also be Chase Gardner as he looks towards the front of the grid.

Owens added, “It is a long week in Ohio. We have a pair of test days before the official race weekend begins. There is a ton of track time which is great for drivers that are willing and eager to learn like ours. We look forward to a solid weekend.”

With two test days leading into the official race weekend, the Team Crosslink quintet will be on track Wednesday and Thursday as they look for speed. With official practice and qualifying on Friday, the Team Crosslink drivers have three chances to stand on the podium over the weekend as wheel-to-wheel action takes place Saturday and Sunday.

Be sure to tune into the Team Crosslink social media pages for news, information, photos and results from the event.