NEWS FLASH: Simpson Back to Winning Ways in Race 2 at Road America 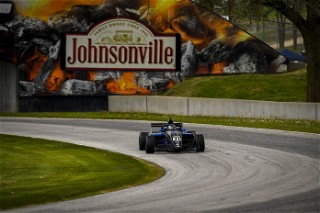 "It was a close race," said Simpson. "I knew I was going to have to defend to stay up front. I was lucky enough to keep a good enough pace to keep Josh (Car) behind to where he didn't get too many opportunities to pass. Luckily I was able to fend him off in the end."

After a clean start, Ian Rodriguez and Dylan Tavella tangled at Turn 5 while battling for third, both fell to the back but never recovered to contend for a podium finish.

Starting in ninth, Choksey powered through the field, capitalizing on Rodriguez and Tavella's misfortune. The TJ Speed driver raced to third by Lap 4 and stayed there for the duration of the 35-minute session.

Jordan Missig brought out the yellow on Turn 7 after spinning at the exit of Canada Corner, Missig did not continue and the damages sustained from the incident were too extensive to fix before the weekend finale.

On the restart, Joshua Car used his sticker Hankook Tires to his advantage, challenging Simpson for the lead. But Kyffin held off Car for win, leaving Car to settle for a second-place finish.

Hunter Yeany and Ernie Francis Jr battled all race, finishing fourth and fifth, with Logan Cusson right on their tail in sixth at the flag.

The FR Americas drivers have one more race at Road America today. With a quick turnaround the drivers will take the green at 10:30am CT.