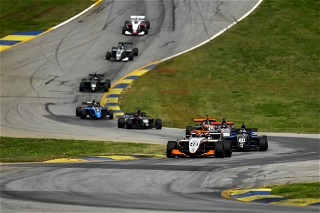 Scholarships on the line as championship chase heats up

More than 25 identical Ligier JS F4 cars equipped with Hankook tires will take to the legendary 14-turn road course for the first time in championship history, while a dozen Honda-powered FR Americas cars will return to Road America for after a two year hiatus.

The last time FR Americas drivers competed at Road America was in 2019 which saw Dakota Dickerson lock up the championship with a come-from-behind victory in the final round of the weekend and Benjamin Pedersen fighting to secure his vice championship title. Both have climbed the racing ladder with Dickerson contending for a championship title in IMSA’s Prototype Championship with the support of Ligier and Pedersen debuting this season in Indy Lights on the HPD-supported team Global Racing Group. 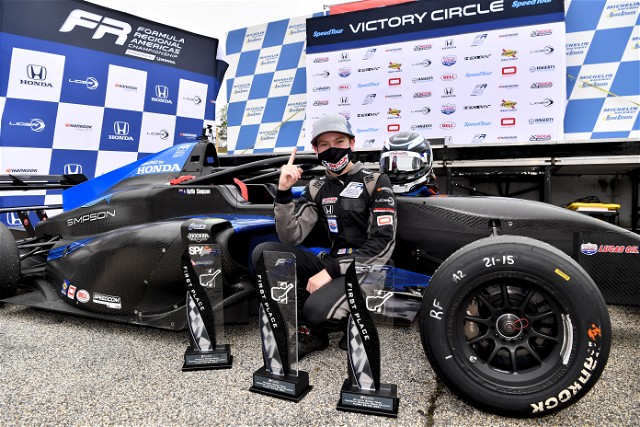 Now a fleet of fresh new drivers will take on the tricky four-mile Wisconsin circuit, all fighting for the next FR Americas title and the scholarship valued at $600,000 from Honda/HPD to enter the Super Formula Championship in 2022.

American Jordan Missig has found success at Road America in the past, winning in the Blue Marble Radical Cup series last season. The sophomore Newman Wachs Racing pilot finished on the podium two out of the three rounds at Atlanta. He enters the weekend second in the championship, 30 points behind Simpson.

As the only driver on roster who has competed at Road America in a Ligier JS F3, Cusson has less than fond memories of the track’s notoriously fast turns. In 2019, an incident early in the first race ended Cusson’s weekend prematurely.

Now with two seasons under his belt and coaching from FR Americas Vice Champion Victor Franzoni, Cusson is ready for his Road America redemption.

“I am excited to head to Road America and see what we can do in rounds four, five and six,” expressed Cusson. “I have been working hard to ensure that I am ready and have been taking in the sights and sounds of other events to try and learn as much as possible. We have a great team in TJ Speed and my three teammates, and I will be pushing hard. 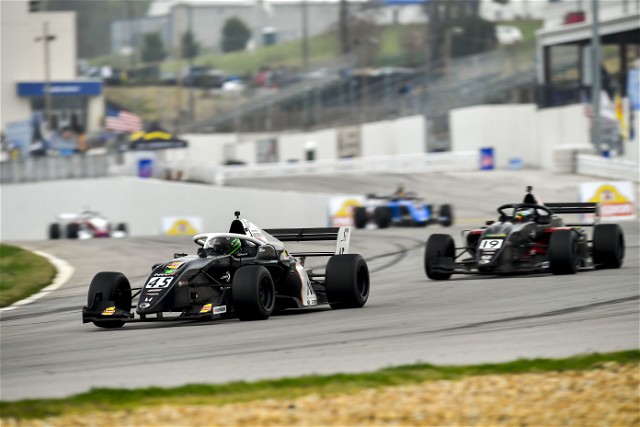 “It was refreshing to work with Victor Franzoni as my coach,” Cusson continued. “He has driven these cars and knows what to expect in specific situations and when changes are made. He has helped me a ton!”

Teammates Joshua Car and Dylan Tavella round out the top-five in standings entering the weekend. Both drivers represented Crosslink Competition on the podium at Road Atlanta.

In a race weekend that features a different format, FR Americas drivers will spend Saturday testing before the official weekend starts on Sunday with qualifying (1:35 p.m. CT) and Round 4 (4:40 p.m. CT). Two 35-minute timed rounds on Monday (8:30 a.m. and 10:30 a.m. CT) will wrap up the Spring Vintage Festival.

The weekend will not be livestreamed, however, fans can follow live timing and scoring all weekend on Race Monitor. Gates are also open to fans. For tickets visit www.RoadAmerica.com.

Over the course of five seasons, the hallmark of the F4 U.S. has become tight wheel-to-wheel racing, filled with large fields of budding talent. The sixth year kicked off the same way in March at Atlanta, with record close finishes and a slender seven points separating first place Jason Alder and second place Noel Leon (68 vs. 61 points) after three rounds. (Championship Standings)

Alder opened his rookie season collecting two victories and a second-place finish at Atlanta. This weekend, the Cookland, Maryland, native looks to carry that winning momentum into Road America, piloting the No. 77 Velocity Racing Development machine. 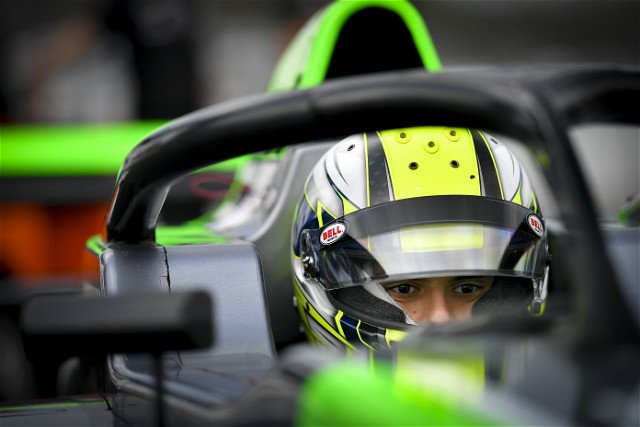 Alder used the break between races to work on his race craft, spending weeks on the sim preparing for his Road America debut.

“I am so excited for this weekend,” Alder said. “I’ve been training and spending time on the sim studying the race track that way I am prepared right away and can get the most out of the test day on Friday. We come every weekend to win, and building off our amazing weekend at Atlanta, I know we can leave Road America with an even bigger points lead in the championship.”

With a stacked field and 75 points up for grabs, Alder will have to work to keep his championship lead, especially from Leon, the reigning NACAM F4 champion. On the hunt for his second F4 title, Leon finished Atlanta with two second-place standings and a win during his debutant U.S. event. The Mexican pilot is looking to collect more hardware and the championship lead this weekend, on another first-time track for Leon.

“This is my first time at Road America, and it is a beautiful track,” Leon said. “We have the pace for multiple wins this weekend. We are determined to lead the points at the end of the weekend.”

Two new drivers will join the championship effort for Crosslink/Kiwi Motorsport at Road America. Testing with the Texas-based team in the past Gabriel Fonseca was forced to miss the 2020 season due to COVID travel restrictions. After sitting out last year, the Brazilian native will finally get his shot at F4 competition.  Making his F4 U.S. debut after spending several years developing in karting, Joseph Daniele will complete the seven-car combined roster for Crosslink/Kiwi.

The weekend will start off with a promoter test day on Friday for drivers to maximize seat time before the official weekend starts on Saturday with practice (8:50 a.m. CT) and qualifying (2:35 p.m. CT). Sunday the drivers will compete in two 30-minute rounds (11:00 a.m. CT; 2:55 p.m. CT). The weekend wraps up on Monday with one final race going green at 9:30 a.m. CT.