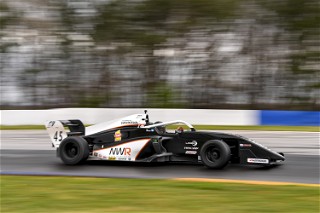 MUNDELEIN, IL (May 13, 2021) – After almost two months off, Newman Wachs Racing will re-fire their competition program as they head to Road America for the second round of Formula Regional Americas Championship Powered by Honda on May 15-17. The team enjoyed considerable success in its first race of the year at Road Atlanta as a returning operation and Team Principal Brian Halahan is hoping to continue the momentum on the purpose-built 14-turn, 4-mile road course in Elkhart Lake, WI this coming weekend. American Jordan Missig has had success on this track, winning in the Blue Marble Radical Cup series, so the team expects to see him running for race wins. Guatemalan Ian Rodriguez had a tough debut weekend in the FRA program, but he has been busy training to make a positive comeback. The team is looking forward to a super successful weekend.

“Finally, it’s time to get back to racing,” Halahan commented. “Coming off the last race, we have a lot of momentum moving forward with Jordan and we’ve completed four very successful test days in between the last race so now I expect him to be fighting for race wins. I think a lot of people may be counting Ian out of the picture, but he will be back fighting to the front end of the field, as well. Hopefully, we can come out of this race with both drivers completing all the races and being on the podium while gaining valuable points towards the championship.”

The drivers will participate in an unofficial test day on the Saturday (May 15) leading up to the event. Sunday (May 16) will provide one official practice session, followed up with qualifying and the first race later in the afternoon at 4:50 pm CT. The event will be completed on Monday morning with the final rounds of the tripleheader with Race 2 at 8:30 am and Race 3 set for later in the morning at 10:30 am. Live timing and scoring will be available on the series website (www.framericas.com) and the Race Monitor app. Unfortunately, there will be no live video this weekend.

Newman Wachs Racing was formed in 2005 by late actor and IndyCar team owner Paul Newman and his long-time racing friend Eddie Wachs to aid the development of young drivers in Champ Car’s Cooper Tires Presents the Atlantic Championship Powered by Mazda. Drivers who have been part of the NWR program included John Edwards, Simona de Silvestro, and Victor Franzoni. After a seven-year hiatus, Newman Wachs Racing has returned to racing, competing in the Cooper Tires USF2000 Championship on the Road to Indy Presented by Cooper Tires. The team added the Formula Regional Americas Championship Powered by Honda to their resume in 2020.