TJ Speed Looks to Carry the Momentum into Road America 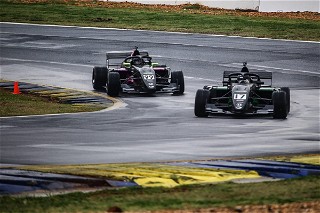 Three wins, four podiums and both the driver and team championship point lead

From their home base in Brownsburg, Indiana to the famed Road America is a short five hour drive but TJ Speed is anxious and excited to get there. Coming off a debut weekend for the ages, the newly formed program currently leads the Drivers’ Championship with Kyffin Simpson and the Team Championship by a whopping 55 markers after only three rounds.

“Not every weekend will go as well as the first one,” explained Tim Neff, Owner of TJ Speed. “While we did manage to score three wins and four podiums, that does not mean that the work stopped. We have been after it as hard as ever in the shop to ensure that we are completely ready to go and continue the success.”

On the strength of three race wins, Kyffin Simpson leads TJ Speed and the FR Americas Championship Powered by Honda field into the 4.048 mile, 14-turn facility. Looking to continue his winning streak, teammate Logan Cusson sits third in the points chase and hopes he can find his way to the top step after a podium result in round one. Varun Choksey holds down the sixth spot on the championship table and consistently improved his finishing positions throughout the weather filled Road Atlanta race event while Baptiste Berthelot performed well for having no preseason test time and finalizing his deal only days before the first green flag of the season.

Neff continued, “I know the other teams have taken this break between rounds to prepare their machines and find speed. It will not be easy to continue what we started but we also have our own set of goals and are pushing hard to achieve them.”

In a jam-packed weekend, TJ Speed drivers will take part in optional practice sessions on Saturday, May 15th before qualifying and the first wheel-to-wheel action will roll off the grid on Sunday. Making space for other programs on the race weekend, rounds five and six of the season will take place on Monday, May 17th. Stay tuned to the TJ Speed social media pages for news, information, photos and results from Road America.