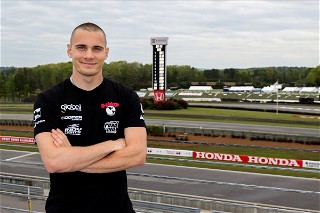 Reigning Formula Regional Americas champion Linus Lundqvist will set out on a crucial campaign in his bid to reach the highest echelons of American single-seater racing as the 2021 Indy Lights Presented by Cooper Tires championship gets underway this weekend.

Lundqvist enters Indy Lights – INDYCAR’s main feeder series – on the back of a dominant campaign in Formula Regional Americas last season, where the Swede powered to 15 wins from 17 races in what marked a striking debut in U.S. racing.

Now stepping onto the next level of the American ladder system, Lundqvist is set for a potentially career-defining year in the States.

With the 2021 Indy Lights champion taking away a scholarship towards at least three guaranteed INDYCAR races in 2022 (including the famous Indy 500) – and with INDYCAR tests on offer for each of the championship top three – the stakes at play are significant to say the least.

“I’m extremely motivated to get this season going,” says Linus Lundqvist, racing for Global Racing Group with HMD Motorsports. “I’ve been given a rare opportunity, I know that, and I intend to make the most of it. As the final step before INDYCAR, everybody in Indy Lights is competing for the same thing. It’s going to be a big fight, but I’m here to face it.”

The opening round of the ten-event championship takes the field back to Alabama and Barber Motorsports Park, which also hosted the single official pre-season test last week.

Lundqvist fired an early warning shot by immediately topping the times in the first of those test sessions, and going a close second quickest to team-mate David Malukas in the other.

The 22-year-old Stockholm resident also swept last year’s FR Americas round at Barber, winning all three races from pole - leaving him with plenty of good memories of the fast and physically demanding 3.8 km road course.

“We had a positive test last week, and all the indications are pointing in the right direction,” Linus Lundqvist concludes. “Having said that, I’ve been around enough to know that testing is always just testing. This is when it actually counts and I can’t wait to see where we’re truly at. Overtaking is quite difficult at Barber, especially in these cars I think, so qualifying will be important for a start. Let’s see what happens, but obviously I’m not here just to make up the numbers. Winning is what drives me.”

The 2021 Indy Lights campaign gets underway with an initial practice session on Thursday. Friday plays host to a pair of qualifying showdowns, used to determine the grids for the weekend’s two races on Saturday and Sunday respectively.

All of the on-track action will be available for international fans through live streaming at www.linuslundqvistracing.se, throughout the year.