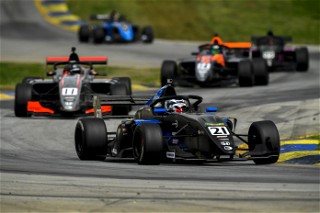 More than 40 drivers from around the world took to the technical Georgia circuit for a triple-round of racing.

The newest FR Americas team TJ Speed made its series debut in style, sweeping the Road Atlanta event with rookie pilot Kyffin Simpson. Simpson drove a perfect weekend; qualifying on the pole position, leading every race lap in two of the three races, claiming the fastest race lap in all three races and leaving the first event weekend as the series point leader.

After a long five-month off season, FR Americas returned to racing action on Saturday for the first of three rounds. An international field of a dozen talented drivers took the green and when the checkers flew, the world was represented on the podium with three drivers from three different countries finishing on the podium.

Kyffin Simpson of the Cayman Islands mastered the 2.54-mile, 12-turn technical track, driving lights to flag for in the No. 21 Simpson Race Products/GoPro/Spy Optic car in a dominating 8.155-second win over the 2019 F4 U.S. champion Joshua Car of Sydney, Australia.

Christian Bogle qualified third for Jay Howard Driver Development and rivalled Simpson early on, but a spin sent him down the order and left Simpson with a huge lead. 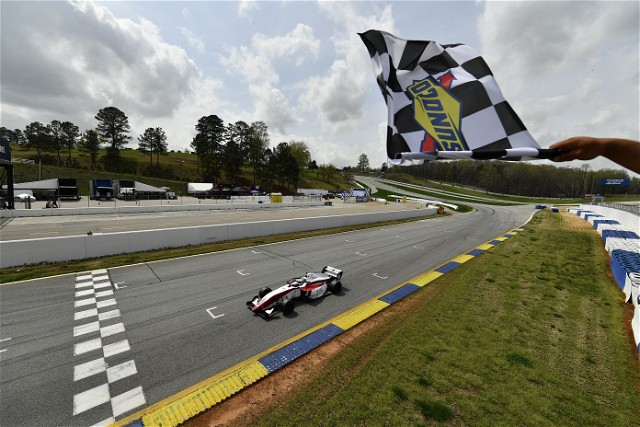 The running order changed frequently in the positions below but in the final circuit it was Newman Wachs Racing’s Jordan Missig who charged up the order to fourth ahead of Dylan Tavella (Crosslink Competition), who finished fifth.

"The start was amazing, it set the tone for the entire race," explained Simpson. "I had a great gap already by the first corner. It was a nice easy race and solid win. I think we can keep up this momentum."

Simpson kept up that momentum on Sunday but the rookie’s route to race two victory was harder, with Missig getting a jump off the line, driving from third to first with a brilliant first lap to hold Simpson to second for half of the race.

The constant pressure from Simpson eventually led to Missig spinning and dropping to third behind Tavella, enabling Simpson to pull away and take his second win by 11.691-seconds.

Rain arrived in the middle of the weekend FR Americas finale, causing chaotic action around the soaked circuit. Simpson held off Missing to complete the hat dance. Mastering the track on Hankook slicks, the pair were the only drivers to finish on the lead lap.

TJ Speed’s Varun Choksey held third for a few laps before Yeany took over the position. After the rain started to fall, Yeany lost third to Car, before dropping a lap behind in the wet while Choksey emerged in a distant fourth. Yeany crossed the line in fifth.

F1 was not the only open wheel series to kick off its season this weekend. The F1-feeder series opened its season on Saturday with a robust field of nearly 30 young drivers from all over the world. The first podium of the season represented all of North America with drivers from United States, Mexico and Canada on the boxes.

Reigning NACAM F4 champion Noel Leon claimed pole by almost half a second ahead of Alder, and led most of the opening race under yellow flag conditions, but it was Velocity Racing Development rookie Jason Alder who claimed the first win of the season after a late race restart put him head-to-head with Leon.

Sandwiched between two Velocity Racing Development drivers, the young Mexican DEForce Racing pilot's priorities changed as Canadian Nico Christodoulou stuck his nose into the mix, challenging Leon for second and helping his teammate Alder advance to first. Alder was able to pass Leon for the win and pull away on the final lap by 1.683-seconds.

Leon held on to second with Christodoulou right on his gearbox, crossing the line in third.

"I want to thank Noel (Leon) for racing me clean all race," said Alder. "Congratulations to my teammate Nico (Christodoulou) for a podium finish for VRD. I want to carry this momentum all the way through the season."

With the grids for Race 2 set by fastest in-lap race from the session before, Adler started from pole, getting the jump on front-row starter Noel. An early four-car incident brought out a full course yellow. The restart was dicey between Alder and Leon, with two rookie drivers battling for position.

Watching the front-row battle playout, Crosslink/Kiwi Motorsport rookie Deukmedjian waited for his opportunity to seize the lead. That opportunity presented itself on Lap 7, as Deukmedjian slid by both Alder and Noel for the lead.

Deukmedjian paced the field until the final three laps when Alder broke his defenses, bringing Leon through with him. The two finished less than a second apart up front, while Deukmedjian was shuffled back to third. DC Autosport’s Rodrigo Gutierrez charged from a 12th place start to finish fourth while Spencer Bucknum (Crosslink/Kiwi) finished fifth.

With heavy rains coating the circuit for Round 3, Race Director Scott Goodyear declared a wet race for the final round, forcing the full 29-car field to start on Hankook rain tires. As the track started to dry during the 30-minute round, Leon nursed his ailing tires and held on to take victory by half a second over Alder, who had to fight his way back past Deukmedjian (third), Christodoulou (fourth) and Christensen (fifth) in the closing laps.

Alliance Racing’s Hayden Bowlsbey had the drive of the day, making up 15 positions to finish 10th in the final round.

For his calm and precise driving, Leon earned the Omologato Perfectly Time Move of the Race. 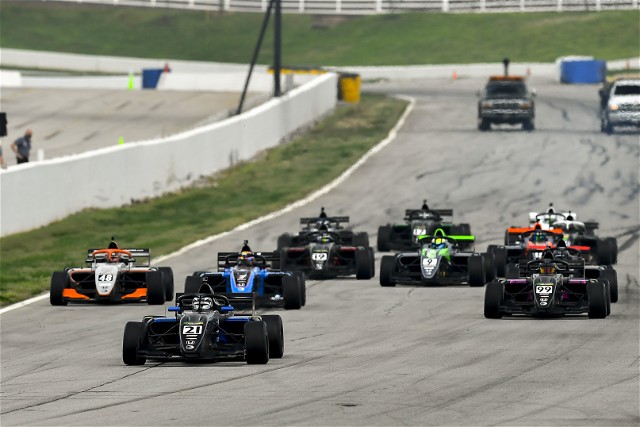 F4 U.S. and FR Americas return to action May 14-17 at Road America for another triple-header event. The races are live streamed exclusively on the SVRA Racing App.