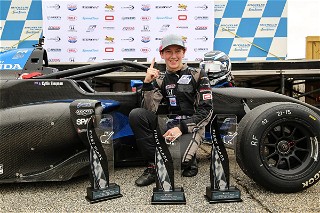 It was a debut weekend, but a winning weekend for TJ Speed. Traveling to the Michelin Raceway Road Atlanta for their FR Americas Championship Powered by Honda series debut, TJ Speed's Kyffin Simpson had a perfect weekend as he qualified on the pole position, led every race lap in two of the three races, claimed the fastest race lap in all three races, and leaves the first event weekend as the series point leader.

A weather filled day during Thursday's Promoters Test Day that saw only wet weather running led to a major delay Friday due to oil being dropped around the circuit before the FR Americas practice session leaving TJ Speed drivers anxiously waiting for their two sessions of the day. With a quick twenty-minute practice session that led into a twenty-minute qualifying run, it was Kyffin Simpson who scored the maiden pole position for the team as he and Logan Cusson had a front row lockout. Varun Choksey put three TJ Speed drivers in the top-seven with a seventh-place effort while Baptiste Berthelot rounded out the quartet in twelfth.

Saturday would prove to be another dominant day for the TJ Speed outfit as Kyffin Simpson converted his race one pole position into a victory en route to scoring the fastest lap of the race. Logan Cusson put a pair of TJ Speed drivers on the podium with his third-place result as Varun Choksey ran fifth for a lot of the race and eventually garnered a sixth-place result. Baptiste Berthelot improved in his first wheel-to-wheel event in North America and put four TJ Speed drivers in the top-ten with a tenth-place result.

Race two on Saturday was nearly a carbon copy of race one. While Simpson fell to second early, the round one winner put pressure on the leader and managed to slip by before mid-race distance. Expanding his lead through the entire race distance, Simpson scored his second victory of the day, this time by 11.691. Logan Cusson narrowly missed his second podium of the day as he crossed the line in another impressive top-five finish in fourth. Varun Choksey and Baptiste Berthelot secured four TJ Speed results in the top-eight with seventh and eighth place results.

“What a great day for TJ Speed and a solid start to our FR Americas season,” explained Tim Neff. “Congrats to Kyffin on a pair of race wins and Logan on two top-five results. All in all, this is a team effort and every guy wearing a TJ Speed shirt deserves some credit. Thank you to all.”

Returning to the track on Sunday and with the third and final wheel-to-wheel action late in the afternoon, TJ Speed drivers waited out the weather as rain moved through the area. With a track drying before the start of their race, it was Simpson who once again jumped out to the lead from the pole position. With a caution on lap six that bunched the field back up, TJ Speed drivers ran first, fourth, seventh, and eighth.

Simpson continued to lead when the race went back green on lap eight as Baptiste Berthelot moved into fourth while Choksey and Cusson battled for P7 and P8. With green flag running to the end, Simpson scored his third win of the weekend and third for TJ Speed. Varun Choksey had his best result of the four-day event to cross the line in fourth while Cusson rebounded from an off-course excursion to finish sixth. Baptiste Berthelot crossed the stripe in eighth adding another four top-ten results for TJ Speed. Additionally, Simpson and Cusson scored the fastest laps of the race, more than three tenths faster than their competitors.

Neff continued, “Great weekend but we can’t stop pushing. When you are on top, everyone wants to beat you, so we need to make sure that we continue to work hard and do what is needed to remain at the front of the field.”