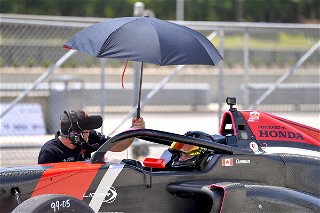 Last season, Logan Cusson continued to improve each weekend in the Formula Regional Americas Championship Powered by Honda and was able to claim his first podium finish at the Homestead-Miami Speedway. Now, with a new campaign about to begin, Cusson is looking to build upon his prior season and battle at the front of the field for race wins. With a new team, TJ Speed Motorsports, Cusson will head to Michelin Raceway Road Atlanta for the first three rounds of the 2021 season this upcoming weekend.

After being removed from the schedule in 2020 due to COVID-19 rescheduling, both the FR Americas Championship and Logan Cusson will be returning to Road Atlanta having each visited last in 2019. Competing in the FR program (formerly F3 Americas Championship Powered by Honda), Cusson finished tenth, eighth, and ninth in the three rounds and will be striving to improve on those results in 2021.

“I know the track well, and I think that will come in handy when we test on Thursday,” expressed Cusson. "After a good 2020 season finish, and a long off-season, I’m really looking forward to the first wheel-to-wheel action of 2021."

Last season, the 21-year-old Canadian began the series running a one-car program before joining HMD Motorsports late in the season with remarkable results. This year, Cusson will be starting the season as part of a three-car lineup, with teammates Kyffin Simpson and Varun Choksey, and the trio of drivers will be able to learn from one another and use each other as resources in their quest for the top step of the podium.

Cusson continued, “Last year I was able to learn so much more and accelerate my learning when I competed alongside teammates at HMD. I think 2021 will be much of the same as Tim Neff and his TJ Speed effort have put together a good group of people and drivers that feed off of one another.”

The Formula Regional Americas Championship Powered by Honda will join the F4 United States Championship and Trans Am as part of the SVRA Atlanta Speed Tour weekend. Before official practice begins on Friday morning, Cusson and TJ Speed Motorsports will have three twenty-minute test sessions in preparation for the three-race, opening weekend. With 18 rounds ahead of him, Cusson is hoping for a strong start this weekend and to set a positive atmosphere for the remainder of the season.