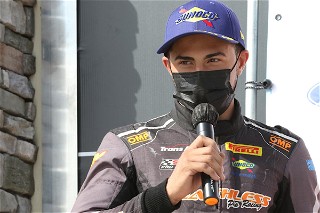 “What an incredible opportunity the McAlister’s are creating through FSR,” Fisher said. “And for these drivers to work with Al [Unser, Jr.] is a great addition to their program. He and his dad helped me immensely with driving techniques in Indycars, so our team's alliance with FSR is coming full circle. Al is an expert on road courses which Chloe and Ernie will benefit greatly with him as their coach.”

Francis Jr., the winningest all-time driver in 55 years of Trans Am racing, will be competing in the Formula Regional Americas Championship Powered by Honda, on behalf of FSR. Already looking to a tremendous 2021 by claiming the pole and setting a new track record at Sebring during the Trans Am season opener as well as being added to the roster of drivers competing in the Superstar Racing Experience (SRX), Ernie is looking forward to adding FR America's schedule to the list.

“I am extremely excited to make my debut in the FR America’s series with Future Star Racing, “Francis, Jr. said. “Coming from a GT car background, open wheel racing had always been out of reach. Having this opportunity is incredible and I look forward to racing this season.”

The recipient of the PMH Powering Diversity Scholarship from Parella Motorsports Holdings, Chambers will be competing in the F4 United States Championship Powered by Honda. Already gaining momentum for the season, she's logged laps in testing with the team in preparation for the first race in March.

“I am super excited to race in the F4 Championship with Future Star Racing,” Chambers said. “I am incredibly grateful to Mark and Alora McAlister for this opportunity, along with Tony Parella of Motorsports Holdings for awarding me the PMH Powering Diversity Scholarship. It is an honor to represent Gift of Adoption Fund - a cause that is so dear to my family.”

Mark and Alora McAlister launched Future Star Racing in 2020, to support talented drivers who, while great at their sport, may be lacking the funds to compete in racing.

“So many times in racing you have an amazing talent, who doesn’t have the kind of money or sponsors they need to compete,” Mark said. “We see it all the time. That’s why we created The Wings and Wheels Foundation, Inc., to support that talent, and Future Star Racing, to provide the tools and professional help they deserve.”