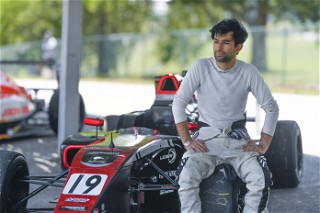 American driver Varun Choksey announces his participation in the 2021 Formula Regional Americas Championship powered by Honda, in which he will be racing with TJ Speed, the newly announced team headed by motorsports veteran Tim Neff.

Choksey advances to the FR Americas series coming off his 2020 formula debut competing in the F4 United States Championship Powered by Honda with Kiwi / Crosslink Motorsport, a rookie season which saw the newcomer race toward seven top-ten finishes.

“I’m extremely excited to have Varun join the team, “says Tim Neff. “We got to know each other last year in the F4 paddock and can’t wait to start testing this week at Sebring with him.  He is a dedicated racer and we at TJ Speed look forward to continuing his open wheel career.”

Choksey entered racing via the world of go-karting at age 12, where over the next several years his impressive natural talent and relentless drive ultimately advanced him to the open-wheel Canadian F1600 series in 2019. In Canada, Varun quickly made a name for himself with two wins and multiple top-ten finishes while simultaneously competing in the World Racing League and American Endurance Racing sports car racing series, where he had four podium finishes. In 2021, the driver is ready to hit the ground racing with his entry into the FR Americas program.

“Having the opportunity to launch TJ Speed with Tim this year is incredibly exciting,” says Choksey. “His track record and deep understanding of the sport speak for themselves, and it’s an honor to be able to work with him and the rest of the team for the Formula Regional Americas 2021 Championship. Last year meant a lot to me as my rookie season, and I’m ready to bring that invaluable experience to the track this year at Americas.”

TJ Speed is the newly announced team from leading engineer Tim Neff, who launches his new effort following a 2020 FR Americas Powered by Honda vice-championship-winning run with HMD Motorsports and countless wins and championships as a partner with the Sam Schmidt Motorsports Indy Lights program.

Choksey will be driving one of the team’s three Ligier JS F3 Formula Regional Americas cars at the season opener in March at the Michelin Raceway Road in his home city of Atlanta.

To contact Varun Choksey, please email varunchokseyracing@gmail.com. For more information on TJ Speed or to contact Tim Neff, please email TJSpeed1@aol.com or by phone to 321.508.6348.