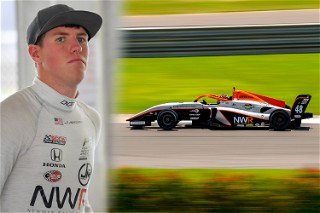 MUNDELEIN, IL (JANUARY 21, 2021) – Newman Wachs Racing is extremely excited to announce their first driver for the 2021 Formula Regional Americas Championship Powered by Honda; 22-year-old Jordan Missig from Channahon, Illinois. Missig has been working with NWR for the last two years, starting in the Radical Cup North America program, where he captured seven wins and 13 podiums en route to a second-place finish in the overall championship standings. Missig followed that success by running the full 2020 FRA season, scoring a single podium finish amidst nine top-10’s. Jordan will again drive the team’s #48 Ligier JS F3 when the season finally gets up and running.

“I’m excited to have Jordan back with NWR for the 2021 season,” enthused Brian Halahan, Newman Wachs Racing Team Manager. “Last year he showed he had the speed, but as a rookie he had a big learning curve, so he had some up-and-down weekends. Grabbing a podium at VIR was a great accomplishment for his 2020 season. I’m looking forward to seeing what he can do this season.”

In 2020, Jordan made the step up to the FR Americas series with Newman Wachs Racing and grabbed his first FRA podium finish at Virginia International Raceway early in the season. His return to the NWR squad is a natural fit, as he has already established a bond with the entire team, working as a cohesive partnership in and out of the car. Jordan has also added a partnership with PSA Check as their spokesperson. PSA is a blood test that can be given young men to give them advanced awareness of the potential of prostate cancer. For more information, please visit www.psacheck.org.

"I’m super excited to be signing on with Newman Wachs Racing for another year in the 2021 FR Americas season,” offered Missig. “Last year, as a rookie, I used it as a building year and this year I am looking to make huge strides in terms of my performance. The guys at NWR did a fantastic job all last year and I am looking forward to working with them again this upcoming season.”

Newman Wachs Racing is a well-known name in American open-wheel motorsports and was formed in 2005 by late actor and IndyCar team owner Paul Newman and his long-time racing friend Eddie Wachs to aid the development of young drivers in Champ Car’s Cooper Tires Presents the Atlantic Championship Powered by Mazda. After five seasons in the Atlantic Championship program, the team took a hiatus until 2017, when they returned to competition in the Road to Indy. In 2020, NWR added yet another series to their resume; the Formula Regional Americas Championship.

The team will continue its heavy off-season testing program with their Formula Regional Americas car. Drivers interested in becoming part of the Newman Wachs Racing squad this season are asked to contact Brian Halahan directly at 727-692-6052 or through email (bhalahan@newmanwachsracing.com).